Cardinal Ritter entered the Regional Championship with one goal in mind “One Play at a Time”. Jake Purichia and Jake Hagan stood out with several of their plays. The opening play found the two of them connecting for the first catch of the game. Before the end of the night, Jake Purichia found Jake Hagan eight different times. The two of them combined for 262 yards of the 312 on the night. Jake Hagan turned four of his catches into touchdowns by finding the endzone from a few yards out. The offensive line did a great job picking up blitzes while Logan Beaman kept Scecina honest with the ground game. Overall the receiving core of Kyree Hollis, Kaelin Nichols, Ell Arnold and Jeffrey Cmehil continued to help when needed as well. A big play by the Kick off team allowed the Raiders to gain possession and work more time off the clock. The Raiders led the Crusaders 21 – 0 with minutes to go in the 2nd quarter. Scecina put together a drive to with a couple big plays that allowed them to put seven on the scoreboard.

The halftime adjustments concentrated on not giving up big plays. The Raiders forced a three and out to start the third quarter. Defensively the Raiders only gave up 56 yards on the ground to the Crusaders. Jake Purichia and Kyree Hollis each ended the night with an interception. Several linebackers and defensive lineman ended the night with key sacks and plays on defense forcing the Crusaders to punt the ball back to the Raiders. Cardinal Ritter will host Paoli High School at Marian University this Friday night for a chance to play in the 2A State title game on Thanksgiving weekend. We hope the fan support will be tremendous and favor the Ritter Raiders 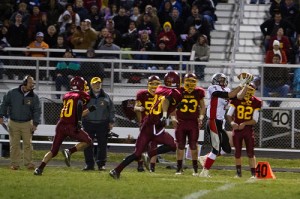