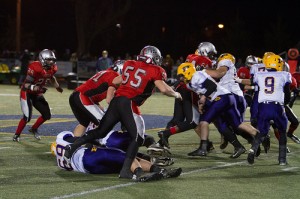 The night started out with little thought by the Raiders of the match up that took place this past summer in a 7 on 7 competition between Cardinal Ritter and Paoli at the Indianapolis Colts Tournament of Champions. The Cardinal Ritter football team realizes that every summer we continue to work on our 7 on 7 drills, to help us organize our offensive and defensive schemes. It develops quite a bit of team chemistry, while we are always looking to improve. They also understand that our season with shoulder pads and helmets prepares us for the playoffs. On Friday the Raiders took to the field looking to do just that, “IMPROVE,” as they have been trying to do all year. The Rams introduced themselves to the Raiders with an inspiring middle of the field intro.

The Raiders took possession of the ball after the coin toss, allowing Jake Purichia and the offense to introduce themselves. Paoli made a couple of plays early, but Jake, as he often does, found one of his wide receivers burning up the turf on a cold night. Wide receiver, Kalein Nichols, broke free and converted a 3rd and 26. The offensive line aided Jake in finding the endzone once the Raiders were inside the five yard line. The Rams took control of the ball after being down by seven. They were able to advance the ball down the field using a no huddle system. The defense of the Raiders found some adjustments early and kept Paoli from scoring. Dylan Faulkenberg stood out on the night with 4.5 sacks. The offense jumped right back into motion after Paoli’s failed attempt to score. The Raiders kept things going using the passing game and running game to put more numbers up on the scoreboard. The halftime score board read 42 – 0, with the Raiders proving that there is always room for improvement.

Jake Purichia was 10 of 13 for 310 yards and five touchdown passes to grab a victory in Semi-State. Jake Hagan had 4 catches for 139 yards and two touchdowns. Jeffrey Cmehil had three catches on the night, two of which went for touchdowns. Kyree Hollis found the endzone with a great pass and catch of 51 yards. Logan Beaman led the team in rushing with 100 yards and punching it in from the 5 yard line in the first quarter as well. The Raiders advance past Paoli 49-16 to the 2A State Championship November 30th at 12:00 pm. The Raiders will face Tipton High School at Lucas Oil Stadium.