The Cardinal Ritter varsity football team won their second straight Indiana Crossroads Conference game against the Beech Grove Hornets on Friday night.  The game was a thriller that went down to the final possession with the Raiders pulling out a 27-20 win.  The weather definitely played a factor for both teams as the night started off calm but eventually turned to torrential downpour headed into the second quarter which left the field in shambles. 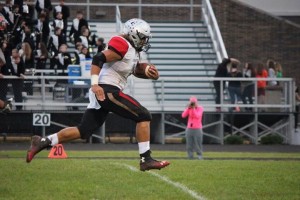 he Raiders came out of the gates hot and scored on their opening drive with a 36 yard touchdown run by Stephen Timmons.  The Raider defense stopped the Hornets and again drove the ball right down the field with a score from Avery Hall to make it an early 14-0 lead. 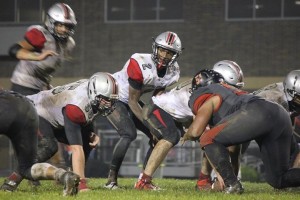 Then the rain came, and when it did, it came down hard.  Initially, it didn’t look like rain, sleet or snow would slow down the Cardinal Ritter offense as they scored two more touchdowns before the half.  One on a second touchdown run by Hall and the other on an perfectly designed play that led to an 80 yard pass from Diomoni Small to a wide open Henry Woodcock.

Going into the half, the Raiders were up 27-0 and the offense and defense looked like it was clicking on all cylinders.  Beech Grove had other plans on their senior night and they looked like a different team mid way through the third quarter. 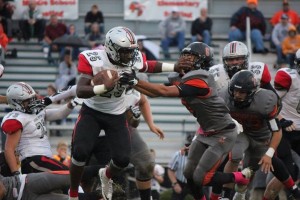 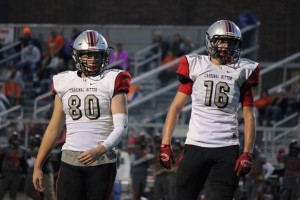 Both teams defenses did their job in the first team possessions of the second half but a long run but Beech Grove put them in a position to score with 8:39 left in the third.  They punched the ball in but failed the two point conversion which left the game at 27-6.  After that score, the game became a defensive battle as both teams offenses failed to put substantial drives together until the fourth quarter. 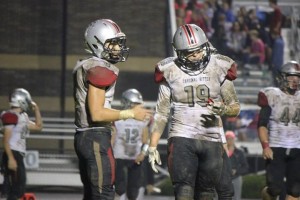 The Hornets scored at the beginning of the fourth quarter and converted the 2 point conversion making the score 27-14 and making the game very interesting.  The Raiders offense had a few good drives but could not get the ball deep into Beech Grove territory which gave the Hornets good field possession throughout the fourth quarter.  Beech Grove came up with a long pass to put them close to the end zone and scored again with 2:37 left on the clock to make the score 27-20. 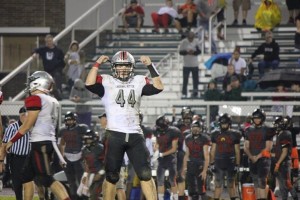 After a missed extra point by the Hornets, they kicked the ball off to the Raiders and played good defense to get the ball back again with 1:27 left in the game.  The Hornets had momentum going into the drive but had a long way to go against a swarming Cardinal Ritter defense.  On the first play of the drive their quarterback threw a pass over the middle that was tipped and Ben Egenolf came in to make the interception and seal the victory for the Raiders. 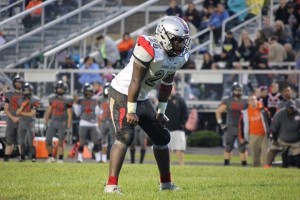 Hall was a workhorse for the second week in a row as he ran for 113 yards on 28 carries and 2 touchdowns.  Timmons helped with the load rushing for 48 yards on 4 carries and a touchdown.  Woodcock had arguably his best game wearing the black, red and silver as he had 3 receptions for 122 yards and a touchdown.  Small did a fantastic job running a ball control offense under center as well throwing for 134 yards and running for 9 more. 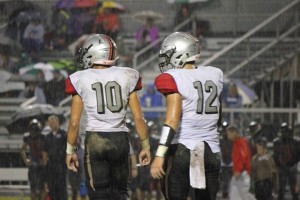 Aside from a couple of big plays, the defense was stellar as usual led by Egenolf’s interception and 9 tackles (7 solo).  Egenolf was all over the field making plays along with his brother Max Egenolf (7 solo tackles), Dillon Olejnik (9 tackles, 8 solo), Zack Yetter (9 tackles, 6 solo), Trey Hunt (8 tackles), Timmons (8 tackles) and Jake Kluemper who had 8 tackles and also a key fumble recovery. 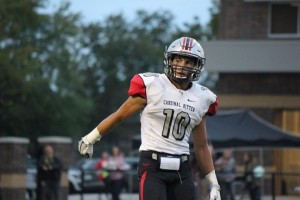 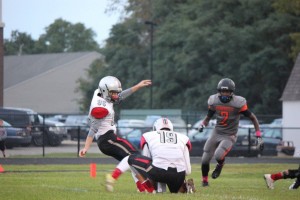 The Raiders look to improve their 3-4 record (3-2 in conference) on Friday as they take on the Scecina Crusaders on Senior Night at Marian University.  Gate open at 6 PM with a 7 PM kick-off. 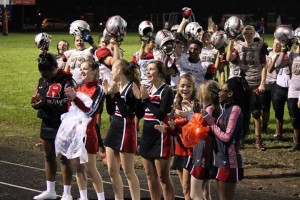 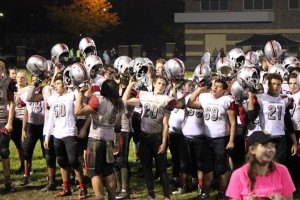 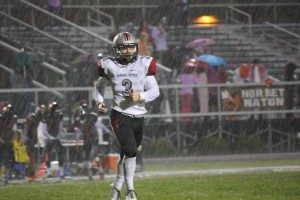