The Cardinal Ritter football team clashed with the Scecina Memorial Crusaders on Friday, October 7, at 7 PM at Marian University. The game was close, but the Raiders brought home a Homecoming victory against the Crusaders, with the final score being 21-18. 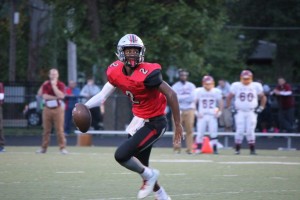 The game kicked off with the Raiders receiving the ball.  Henry Woodcock gave the Raiders a first down on a completion from Diomani Small, as did Stephen Timmons, who also had a 9-yard catch. Avery Hall added three more first downs before the Raiders fumbled the ball, allowing for the Crusaders to take over. By the end of the first quarter, the score was tied 0-0. 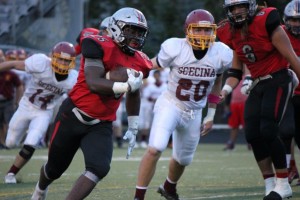 In the second quarter, the Crusaders scored the first touchdown. However, Zach Yetter blocked the point after to make a score of 6-0.  Trevor Browder received the kick-off and was brought down at the Raider’s 33 yard line. Small ran the ball for a 16-yard gain and a Raider first down. Avery Hall punched in the first Raider touchdown with a massive 51-yard carry.  The kick was good and brought the score to 7-6, good guys.  The Crusaders fought back scoring again but could not convert the 2 point conversion making the score 12-7. 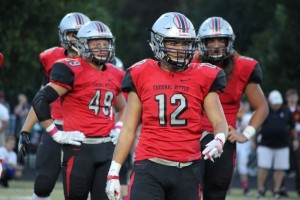 Later in the second, defensive standout Max Egenolf sacked the Crusader quarterback for an 11-yard loss. Timmons that up by sacking the Crusader quarterback again for another seven yard loss.  The Raiders got the ball back and began another scoring drive.  Browder had a two first downs off of an 11 and 13-yard catch from Small.  Right before the end of the second quarter, Timmons rushed for another Raider touchdown making a halftime score of 14-12, Raiders. 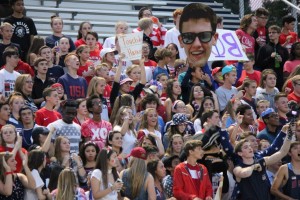 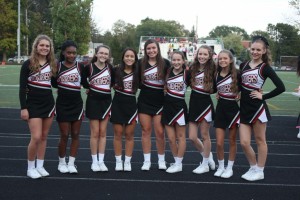 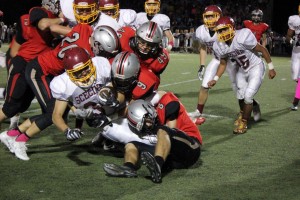 The defense started on the field in the second half.  Egenolf, along with Seth Knutson, Bryce Giebel and Trey Hunt played hard hitting defense, stifling the Scecina offense Throughout the third quarter.  The Raiders offense could not punch the ball into the end zone but had some big plays. Kyle Price had a huge 45-yard catch and Brad Bacon and Browder both caught the balls first downs. When the third quarter ended, the score remained 14-12, Raiders. 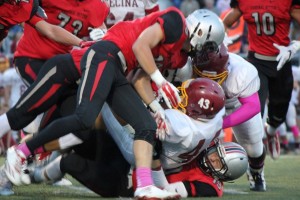 The Crusaders began the fourth quarter with the ball. Egenolf and Hunt continued fighting on defense, but the Crusaders scored another touchdown, bringing the score to 14-18, Crusaders. The Crusaders attempted a 2-point conversion, but failed again to get past the Raider defensive line. 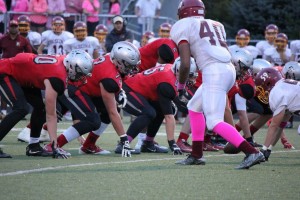 When the Raiders received the ball, Timmons gave the Raiders a first down and Henry Woodcock followed that up with a 48 yard reception from a pass from Small for a third Raider touchdown. 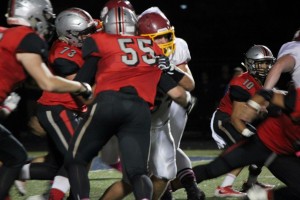 The end of the fourth quarter brought every one their feet as Scecina began driving their offense into Raider Territory.  The defense continued to stop the Crusaders for the first and second downs, but Scecina kept finding a way to come up with big plays to move the chains and get first downs.  The Crusaders brought the ball all the way down into scoring position but with 38 seconds the Scecina quarterback threw a pass into the end zone that was picked off by an amazing play by Browder to seal the third straight victory for the Raiders.

After the game, Raider Head Coach Ty Hunt said, “Some of our guys sacrificed for the good of the team.” When asked how the victory would affect the Raiders in the future, he replied, “We’ve got a lot of work to do.” 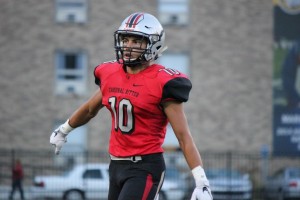 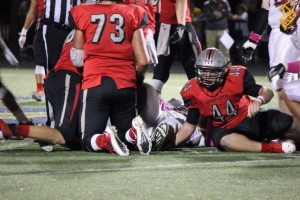 The defense was led by Trey Hunts 10 solo tackles (12 total) and Egenolf’s big plays all over the field.  Egenolf added 8 tackles in addition to his big sack in the second.  Browder added 7 tackles to his game saving pick.  “Big” Ben Szeszycki and Yetter complemented the defense with 9 tackles each.

The Raiders finish up the regular season next week as they take on Indiana Crossroads Conference foe Park Tudor next Friday, October 14, at 7 PM, at Marian University.