In a thrilling matchup against the Triton Central Tigers who were previously undefeated in the Indiana Crossroads Conference the Lady Raiders took home the title in 4 sets. The Cardinal Ritter volleyball team stole the show away from their senior night by coming in hungry for another conference win. After starting off slow in the first set, they used the other teams energy to get them excited and ready to go.

After an easy second set win, 25-14, the third set proved to be a bit more of a challenge. The Tigers led the entire 3rd set until the score became 23-21. The situation sparked the Lady Raiders as they came back to win a close match of 25-23. By the fourth set, the Raiders were ready to leave with a win, easily taking it 25-12. The team was led by a stellar offense duo of Callie Waites with 56 assists and Maria Emmick with 28 kills.  Angelique Allen and Sarah Middaugh each added 11 kills as well.  On Defense the Lady Raiders were led by Jenna Purichia with 22 digs, Emmick with 20 digs, Katie Gillig with 19 digs and Myka Radecki with 14 digs.  Emmick also added 5 blocks on the night with Evie Diagostino adding 3 and Becca Collester with 2.

The girls are back in action at home this Thursday to take on Lutheran.  The JV starts at 5:00pm with varsity to follow. This is also senior night, so please help us pack the house to honor our 5 seniors: Angelique Allen, Becca Collester, Maria Emmick, Katie Gillig and Myka Radecki. The senior night festivities will take place between the JV and Varsity game. 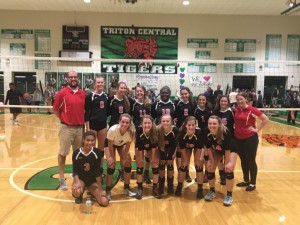