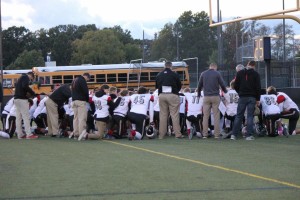 The air was frigid and the game was long, but the Cardinal Ritter Raiders proved themselves to be masters of the field yet again as they defeated the Heritage Christian Eagles with a whomping score of 35-13. The game was hosted by Heritage Christian on Friday, October 21, at 7 pm. The Raiders win puts them at round two of the IHSAA Sectional Tournamnet. 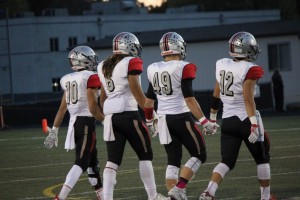 The game began with the Raiders kicking off to the Eagles. Possession changed quickly when Trevor Browder intercepted the ball, taking it to the Eagles 48 yard line. Avery Hall and Stephen Timmons quickly went to work on offense. Hall ran the ball for a Raider first down and Timmons had a 20 yard carry. Hall continued fighting the Eagle defensive line and scored the first touchdown of the game off of a 17-yard carry while carrying defenders the last 10 yards into the endzone. 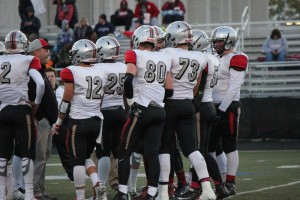 After the score the Raiders  kicked the ball back to the Eagles, but it went out of bounds giving it to HC on their own 35 yard line.  On the next play, the Eagles answered back with a 65 yard run that resulted in a touchdown for Heritage Christian. The point after was blocked by Ben Szeszycki. The Eagles kicked to the Raiders, who had a huge return, but fumbled the ball, allowing Heritage Christian to regain possession.  During the Eagles drive,  Stephen Timmons and Bryce Giebel sacked the quarterback for a seven-yard loss and shortly after, the Raiders were back on offense with 4 minutes to go in the first quarter. 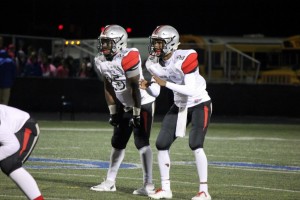 During the next Cardinal Ritter possession Raider quarterback Diomoni Small made a huge completion to Szeszycki, who gave the Raiders another first down. Timmons then caught a pass from Small for a 31-yard Raider touchdown and at the end of the first quarter, the score was 14-6, Raiders. 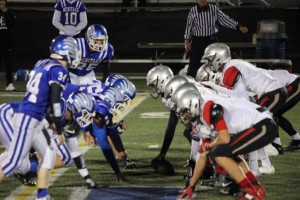 The second quarter didn’t offer much aid to the Eagles. After attempting to drive the ball forward, the Eagles were stopped on fourth down. The Raiders then took over, but they too had no success, forcing them to punt the ball away, which was the same fate for the Eagles on their next possession. Back on offense, Trevor Browder caught the ball for a first down. Avery Hall ran the ball twice for a five and eight yard gain, giving the Raiders another first down. 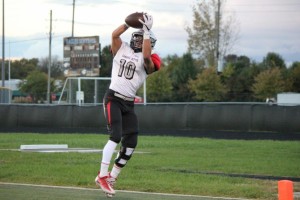 Browder and Hall blew past the Eagle defense, with Browder gaining a 14-yard first down followed by Hall running a massive 42 yards while juking multiple defenders to the goal line. However, the Raiders were pushed back to the 23 yard line after multiple penalties that caused dissension amongst the Raider fans. Hall and Browder made up for this after Browder caught the ball for 22-yard gain down to the one.  On the next play, Hall looked like vintage Bo Jackson running over “the Boz” as he took the ball, ran to his right and right over the Eagles linebacker for his second touchdown of the game. 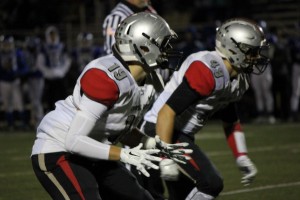 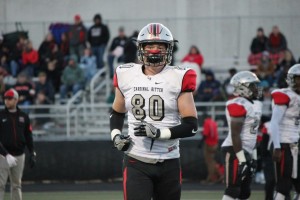 When the second half began, Brad Bacon received the ball for the Raiders, bring it to the 26 yard line. Henry Woodcock caught a pass for a Raider first down. Hall continued dominating on the gridiron. In three carries, Hall ran for 62 yards and two first downs. Stephen Timmons gave the Raiders another touchdown after his completion from Small with 7:03 left in the third. 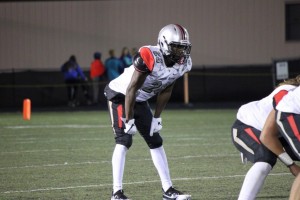 The Eagles returned the ball to their own 27 yard line. Jake Kluemper managed to keep the Eagles from completing a pass and they soon were forced to punt. Hall had another huge gain, running for 30 yards. After another Raider first down, Xion Russell scored a touchdown on a 31-yard carry. The Eagles received the ball once more and Max Egenolf led the way as the Raiders fought back on defense.  The third quarter ended with the score being 35-13, Raiders. 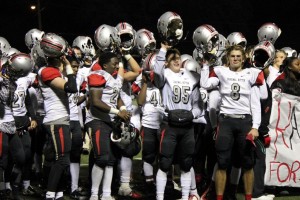 As the final quarter of the game began, it soon became evident that both the Raiders and Eagles knew who the clear victor was. The Eagles turned the ball over to the Raiders after being stopped on fourth down. Hall ran for 30 more yards on two separate carries, and Xion Russell had a 28-yard carry. The Raiders were stopped on a fourth down but could not kick the field goal giving the ball back to Heritage Christian deep in their own territory.  Later in the fourth, the Eagles had another turnover to the Raiders, who let the clock run down, ending the game at 35-13, Raiders. 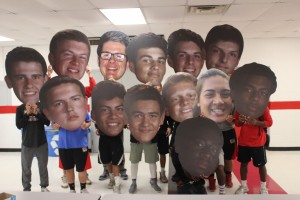 Small continued his improvement as signal caller throwing for 119 yards and 2 touchdowns.  Hall was an absolute beast on the ground running freely through the Eagles defense for 227 yards and 2 touchdowns on just 25 carries.  Timmons complemented Hall’s ground game with 24 yards of his own on the ground and adding 3 receptions for 41 yards and 2 touchdowns.  Browder was able to do his best impersonation of Small by completing a pass while added 35 yards on 6 receptions.  Dillon Olejnik led the defense in tackles with 10 (7 solo) and a momentum swinging sack.  Egenolf was reliable as always adding 8 tackles of his own as was Timmons and Zach Yetter with 7 tackles a piece.  Yetter also added a sack.  Russell had a breakout game offensively with 9 carries for a 74 yards and his first touchdown of the year.

The win propels the Raiders to the second round of the playoffs against conference foe, Scecina at University of Indianapolis at 7 PM, Friday October, 28th. 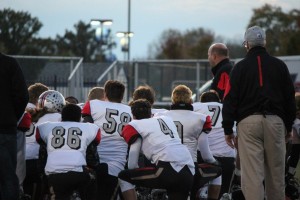 The Raiders defeated Scecina in a home game two weeks ago at Marian University. Head Coach Ty Hunt was asked how the Raiders would go into their next game against their week 8 opponent, the Crusaders, he had this to say, “United, we can get a lot of things accomplished. Father Matt Tucci’s homily at the pre-game mass resonated with us and as long as we remain united we can continue to get things done.”