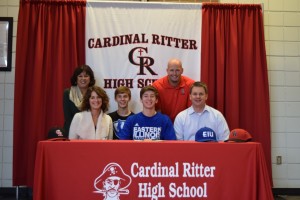 Senior Blake Malatestinic was honored today at Cardinal Ritter for signing his commitment to Eastern Illinois University to play baseball beginning in the year 2017.  Blake is the son of Noelle Malatestinic and Dave Malatestinic, who were able to attend along with his brother, Jarek Malatestinic, Coach Scott, Mrs. Hoy, Mr. Martin and a slew of friends and teammates. EIU is a Division 1 college located in Charleston Illinois.  Blake is going to have an opportunity to pitch at a high level with former Raider great Logan Beaman, who transferred to EIU this summer. 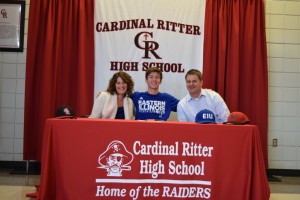 Blake will be a four year starter this year.  He has pitched some big games over the years and has built a tremendous reputation for himself.  His career at Cardinal Ritter began his freshman year when he was thrown into the fire by entering the game against a formidable Covenant Christian team and earning a 3 inning save.  He really made a name for himself his sophomore year by pitching a four hitter against the former #20 MLB pick and Cathedral with numerous professional scouts there.  Blake then solidified his legacy by his gutty performance in last year’s IHSAA tournament when he dominated three teams for three wins after a minor injury set him back earlier in the year. 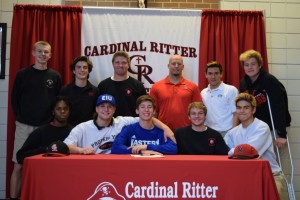 With the signing, Blake said, “I feel that a weight has been lifted off my shoulders and this makes me more excited for the school season. Now I can focus on living in the moment and playing high school baseball.  I don’t have to have the stress of thinking about my future.”

Blake had plenty of opportunities to play but chose Eastern Illinois to pursue his college education.  He said he chose EIU because, “the community and coaching staff is very genuine.  They run the program like here (Cardinal Ritter).  They focus on building men, not baseball players.” 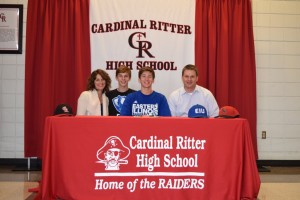 With the early signing, Blake can focus on the season and work on his craft to be ready for the D1 level.  Many student-athletes find that there is a “target” on their back from other teams, Blake knows that this is a possibility but says, “that makes me want to work harder since I have worked hard to achieve my goal of Division 1 baseball, now I can live this experience.” 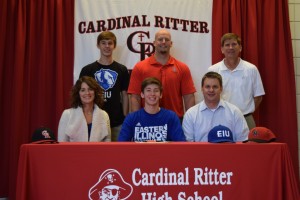 Having a familiar face will help Blake with the transition to college athletics and he is excited to be teamed up with Beaman again. “It will make me feel comfortable right off the bat, especially since I played with him before.  It will be like having a big brother there.”

The Raider Nation is excited to see Blake help the Raiders this year and beyond!!!