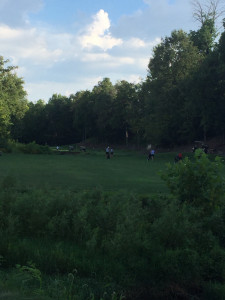 On Tuesday the Lady Raiders Golf Team ventured back up to Old Oakland in Lawrence to play a four-way match with Lawrence Central, Lapel, and Knightstown. This is the same 27-hole golf course where the LC Invitational was held a couple of weeks ago. This time the girls played the West Course, which had a few very challenging holes. The Raiders finished second with a score of 212, behind Lapel with a 205. LC finished third with 227, and Knightstown was fourth with 259.

Leading the scoring effort for the Lady Raiders was junior Madison Hurrle firing her season best 46, followed by senior Lizzie Knight with 53, junior Annie Melton with 54, and seniors Frankie Viglietta and Haley Sullivan with a pair of 59’s.