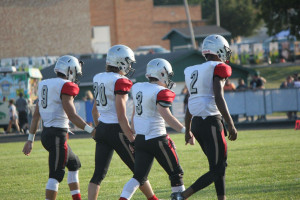 The Cardinal Ritter Raiders Football Team returned this season with a fresh win under their belts against the Monrovia Bulldogs, carrying over their winning streak from last season’s State Championship. Cardinal Ritter came out hot with a comfortable 14-point lead with the final score being 20-34. The team had to go to Monrovia for game 1 at 7 PM and face t 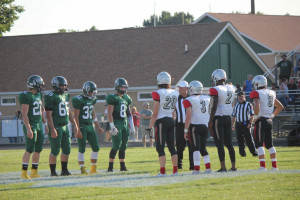 he team they beat to advance to the championship game last year, which is never an easy feat.

The moment the clock started ticking in the first quarter, the Raiders had their eyes set on two things: a glorious victory and the end zone. Immediately, returning quarterback Diomoni Small completed a pass to Henry “Napalm” Woodcock for a touchdown with 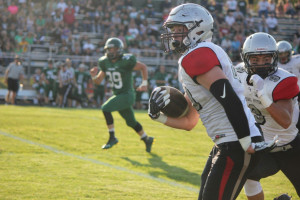 9:02 left in the first. New kicker Matthew “Iron Foot” Boberg was sent in for the point after. After a very brief possession, the Raiders stopped the Bulldogs on 4th and 2, taking back the ball for their own inside bulldog territory.

On the first play of the series, Small ran the ball to the Bulldog 30 and a Raider first down.  Kyle “Kay Pee-Zee” Price then caught a pass 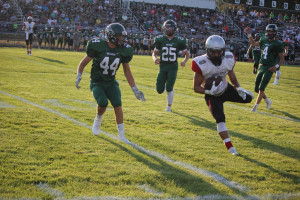 for a gain of seven. After a loss of a yard and a flag on the following play, the Raiders continued on 1st and 10 at the Bulldog 33 yard line.Ben “The Jet” Egenolf then did his best Odell Beckham impersonation, leaping up one handed with a defender on him, then falling to the ground, to come up with an impressive 24 yard catch bringing all of the momentum towards the Raiders.  After an 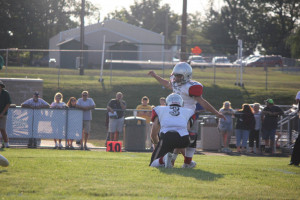 incomplete pass, Egenolf made another completion for a Raider touchdown.

After a failed 2 point conversion attempt, Boberg kicked to the Bulldogs, who returned it to their own 44 yard line. The Bulldogs made small advances forward, managing to gain a couple of first downs. Notable defenders were Kendall “The Hammer” Dalverny, Jake “the Snake” Kluemper, Egenolf, and Mitchell 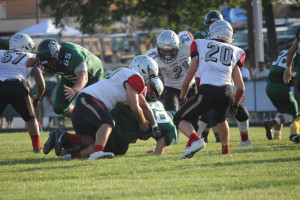 Wilson. After Monrovia drove the ball another 12 yards to the Raider 3, the first quarter came to end with the score 0-13, Raiders.

The Bulldogs got an uplifting taste of confidence by beginning the second quarter with a touchdown. The point after was good and Monrovia kicked to Brad “Big Play” Bacon, who returned the ball to the Raiders’ own 30 yard line. A flag on the following play 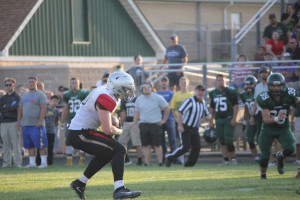 took the Raiders back to 2nd and 20 on their own 20. Price picked up a 6-yard pass from Small, as did Woodcock, who picked up 31 yards, moving the ball to the Bulldogs’ 46.

After an incomplete pass, “Supreme” Small ran the ball for 25 yards on the following two plays. The Raiders called a timeout, and on the next play, Kluemper caught an 11-yard pass from Small. Small passed to Bacon, who 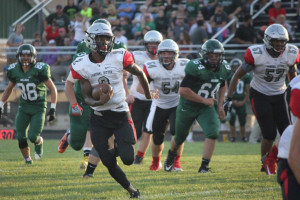 completed it for a third Raider touchdown with 8:24 left in the first half. Boberg made the point after and set up to return the ball to the Bulldogs.

Monrovia returned the ball to their own 21, stopped by Tre Stubbs. Egenolf and Dalverny continued making plays on defense as the Bulldogs inched their way forward. After a Bulldog first down, Seth “The Kraken” Knutson sto 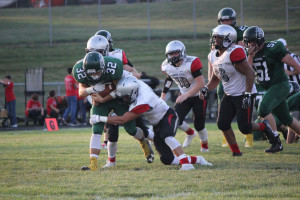 pped the ensuing play, costing the Bulldogs 3 yards and moving them back to the 50 yard line. An incomplete pass and short run later, Monrovia punted to Cardinal Ritter which Egenolf returned the ball at the Raider 25 on a fair catch.

Unfortunately, the Raiders couldn’t catch much momentum on their next possession and they punted back to the Bulldogs, who r 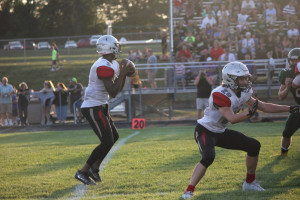 eturned the ball to the Raiders’ 43 with 3:43 remaining in the second quarter. The Raiders iron-hearted defense kept the Bulldogs at bay until 4th down. Unexpectedly, Monrovia converted the first down and scored on a 36-yard touchdown pass but were unsuccessful kicking in the PAT.

With 2:03 on the clock, Bacon returned the ball to the 50 yard line. With no further s 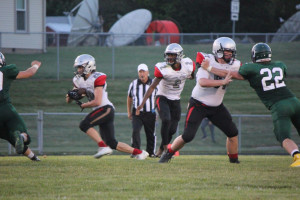 uccess, the ball was turned over again to Monrovia at the Raider 29. The Bulldogs picked up 9 yards by 4th down, their biggest obstacle being Knutson, who blocked an attempted pass and stopped the run that followed. After another run play and two more incomplete passes, with a near interception by Kluemper, Monrovia turned over the ball at the Raider 17 yard line. With three seconds r 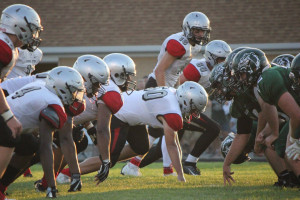 emaining, the Raiders let the clock run down. The score at halftime was 13-20, good guys.

During halftime, Assistant Coach Austin Crapo was asked what the Raiders had in store for the second half. He answered, “We’re going to show dominance. We’re going to release the Giebel.”

And indeed they did. The beginning of the 3rd 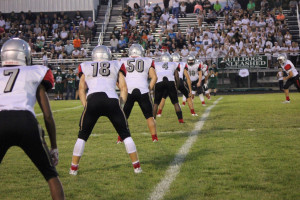 quarter saw Monrovia squib kick to Ben “The Jet” who returned the ball to the Raider 39. A flag against the Bulldogs advanced the Raiders another five yards before their next play. After no gain on first down, Monrovia intercepted the ball the next play at their own 19 yard line.

On 1st and 10, they too had no gain, as they were stopped by Trey Hunt. Wilson s 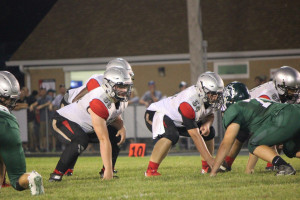 topped the run on the next play, taking the Bulldogs to 3rd and 3. Gaining a first down, the Bulldogs then got a chance to meet the fury of Bryce “Black and Blue” Giebel, who only allowed them 6 yards between their next two plays.

However, Monrovia managed to maintain possession of the ball, picking up two first downs along the way. They were met with re 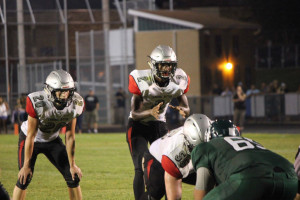 sistance from Wilson, Kluemper, and Manolo “the Machine” Suazo. With an incomplete pass on 2nd down and no gain on 3rd, the Bulldogs found themselves facing 4th and 9 on the Raider 33. Once more, they attempted the 4th down conversion, but everyone knows that lightning never strikes the same place twice. On their conversion attempt, Monrovia fumbled the ball, but managed to recover it at the Raider 47 yard line. That recovery would do them no good, h 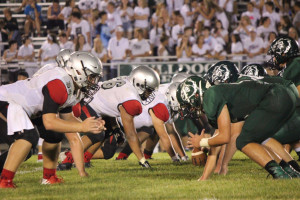 owever, as the ball was then turned over to Cardinal Ritter with 2:37 left in the third.

Again, “the Kraken” was released for a massive 53-yard rush for a Raider touchdown. The point after was good and Cardinal Ritter got set to kick back to Monrovia. The Bulldogs returned the ball to their own 29, stopped by Darrell Roberson. Monrovia trekked down the field with run after run, stopped at the Raider 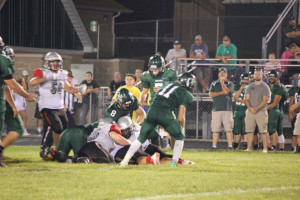 17 as the third quarter came to an end.

The score at the beginning of the final quarter was 13-27, Ritter. The Bulldogs continued utilizing their footwork, slowed down by the combined efforts of Egenolf, Woodcock, Dalverny, and Roberson. After another 4-yard run, Monrovia scored their third touchdown of the game, completing the PAT as well with10:06 left in the fourth. 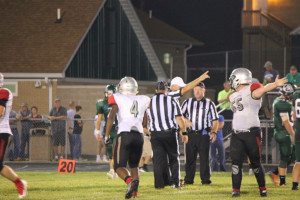 ttempting to shift the odds in their favor, the Bulldogs went for an onside kick, but Knutson returned it for 25 yards to the Bulldog 47. Egenolf rushed for a yard and Price caught a 10-yard pass for a first down. Small ran for 6 yards to the Bulldog 28 and Egenolf and Woodcock subsequently completed another 18 passing yards. Between the next two plays, Knutson picked up 10 rushing yards and scored yet another Raider touchdown with only 6:28 remaining on the clock. 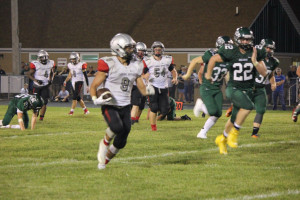 he PAT by “Ironfoot” Boberg was good and the Raiders kicked back to Monrovia. Stubbs again stopped the return at the Bulldog 27 yard line. Following an incomplete pass, Egenolf and Suazo stopped the next Bulldog rush. After gaining 24 yards and two first downs, the Bulldogs were halted by Marlon Anderson on the Raider 40 yard line. Monrovia threw two more incomplete passes 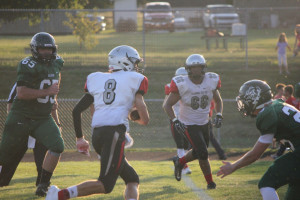 before making a first down completion. On 2nd and 8 on the Raider 25, ready to score again, the Bulldogs were hit with a storm from the Raider defense, causing a second fumble by Monrovia. Only this time, it was Cardinal Ritter who recovered the ball at their own 29. 2:29 remained on the clock.

The game had all been but decided, but a game is never over until the clock reads 00:00. Egenolf ran for 30 yards on the next two Raider plays. After suffering a loss of 5 on second down and a loss of 2 on third, the Raiders sent in LaDarryl Woods to punt on 4th and long. Monrovia received the ball at their own 19 yard line, down to 1:16 left in the game. The Bulldogs threw an incomplete pass, but made up for it with a 12 yard run on 2nd down, stopped by a tag-team effort from Kendall Dalverny and Mitchell Wilson. Monrovia rushed for another 48 yards between 1st and 2nd down, Jake “the Snake” Kluemper slithered his way to the ball carrier for the final tackle of the day. At the end of the fourth quarter, the final score was 20-34, Cardinal Ritter.

Having secured their first win in their season opener since their State Championship last season against the Eastbrook Panthers, the Raider Nation continues powering forward, focusing intently on the distant light at the end of the tunnel that is this season’s State Championship.

After the game, Raider running back Seth Knutson was questioned about how this victory would affect the rest of the Raiders’ season. He replied, “I hope this is going to be a step forward. This was a big game for us.”

The Raiders will go on to play the Lutheran Saints next Friday, August 25 at Marian University. Kickoff will be at 7 pm. Come out and support your team!