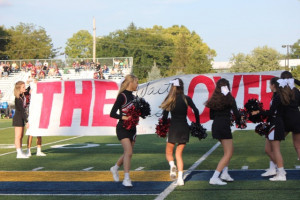 In their second game of the 2017-18 season, the Cardinal Ritter Raiders emerged triumphant against the Lutheran Saints on the Marian University gridiron on Friday night.. Despite falling slightly short at halftime, the Raiders reminded everyone what it means to be the underdog as they displayed an incredible comeback. The final score of the game was 36-21. 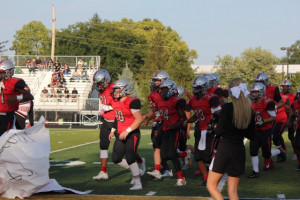 he Raiders looked to hit the Saints early as they kicked an onside kick and recovered the ball to gain the first possession of the game.  It was a gutsy call that paid off, but the team was unable to capitalize on the momentum and ended up punting pinning the Saints inside the 10 yard line.  Lutheran and their big offensive line took the next possession for 10 minutes and drove it down the length of the field for the first score of the game.  The Raiders were able to score in the first but did not c 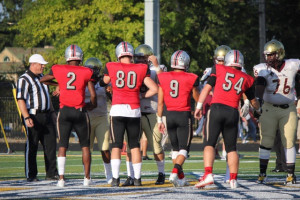 With the second quarter, the Raiders trailed by one. As the Saints gradually moved the ball down the field the defense fought back, but unfortunately, Lutheran managed to retain possession of the ball for the majority of the second quarter. With 1:53 left before halftime, the Saints scored another touchdown and the point after was good. 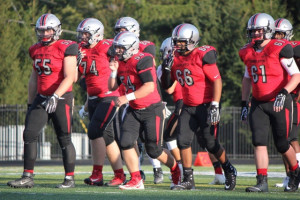 Lutheran kicked off and Brad “Big Play” Bacon returned the ball to the Raider 39 yard line. After a gain of a yard and an incomplete pass, Diomoni “Supreme” Small passed to Henry “Napalm” Woodcock, who subsequently completed 45 passing yards between two plays.  Kyle “Kay Pee-Zee” Price made a 12-yard reception for a first down, then caught a touchdown pass from Small on the following play leaving 0:29 on the clock. The Raiders sent in Matthew “Ironfoot” Boberg, who kicked 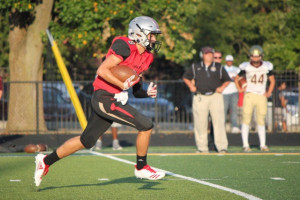 the PAT and put up another point for the Raiders. After kicking back to Lutheran, Mitchell Wilson made the stop at the Saints’ own 17 yard line. The Saints held the ball and let the clock run down to go into half with a 14-13 lead.

The second half was the game of champions and penalties. Despite having received the ball at the end of the second quarter, the 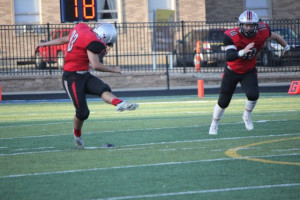 Saints kicked the ball back to Cardinal Ritter. Brad “Big Play” Bacon ran for a 90-yard return and a Raider touchdown. The Lutheran fans erupted in a volley of protests, but were drowned out by the thunderous shouts of praise and pride by the Cardinal Ritter fans and student section. The point after was no good and Ritter kicked the ball to the Saints, landing it out of bounds at the Lutheran 35 yard line. 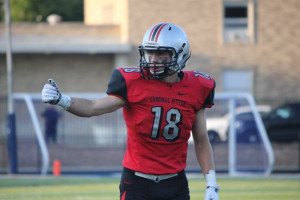 most immediately, the Saints felt the wrath of the Raiders. “Charging” Trey Hunt and Bryce “Black and Blue” Giebel quickly shut down the Saints’ running game, forcing them to punt after a mere three plays. The Saints punted the ball to Ben “The Jet” Egenolf, who returned it to the Raider 42. Seth Knutson ran the ball for three yards and Price made a 13-yard catch for a Raider first down.  On the 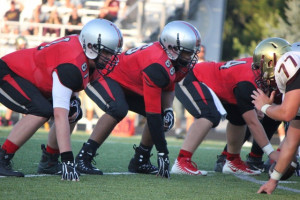 next play, Small carried the ball for a whomping 26 yards and a first down. After Knutson picked up another two yards, the Raiders were penalized for a delay of game, costing them five yards. After losing another four yards on second down and being rushed out of bounds on third down, “Ironfoot” Boberg stepped onto the turf once more, kicking a 31-yard field goal for the Raiders.

Boberg kept up his stellar kicking game, as he kicked the ball back to the Saints, all the way to their endzone for a touchback. Starting at their own 20 yard line, the Saints gained two yards, but were stopped by Manolo Suazo. On the next play, Lutheran compl 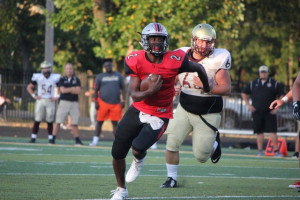 eted a pass, but their was a flag on the play, taking them back five yards for 2nd and 13 on the Saint 17. The Saints gained a first down on the ensuing play, being pushed out of bounds by Egenolf. Lutheran threw an incomplete pass on the next play, but the Raiders were charged with pass interference, much to the outrage of the Cardinal Ritter fans. Gaining 15 yards from the penalty, the Saints squandered their good fortune by repeating their mistake of throwing another incomplete pass. On 2nd down, Marlon Anderson and Kend 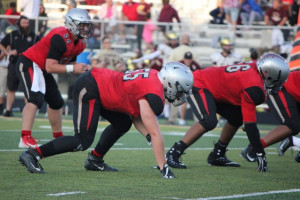 all “Demolition” Dalverny sacked the quarterback for a loss of two yards. The Saints managed to complete a pass on 3rd and 12, but it did them no good as they were flagged during the play and pushed back five yards.

Facing 3rd and 17 on their own 44 yard line, Lutheran ran the ball, picking up a gain of seven, but the Raiders released “The Kraken” Knutson, who made the stop on the play. Unsurprisingly, the Saints were flagged yet 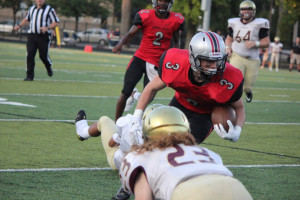 again, but Ritter declined the penalty and Lutheran punted the ball to the Raider 31 with 3:24 left in the third quarter.

The issue with releasing “The Kraken” is that once he’s out, there’s really no putting him back. Knutson rushed for three yards, followed by a 10-yard completion by Small to Price. Knutson then picked up another 11 rushing yards between the next three plays for a first down, taking the ball to the Saints 45. Small picked up a yard just before the third quarter ended.

Going into the final quarter of the game, the score was 23-15 Cardin 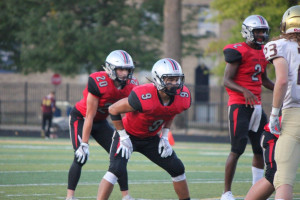 al Ritter. Both teams had unfinished business and neither were ready to call it a day just yet. No amount of blood, sweat, or tears would keep any player off that field from fighting with everything they had.

“Big Play” Bacon caught a 36-yard pass from Small, taking the ball all the way to the Lutheran 8 yard line. The Raiders were slowed down after a loss of three and an incompletion, but after a timeout, Egenolf caught an 11-yard touchdown pass from Small with 10:36 remaining. The PAT was no good and the Raiders kicked to the Saints, who returned it to their own 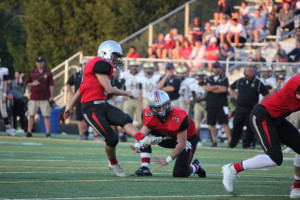 Following a 9-yard completion, the Saints threw an incomplete pass. Between the following two plays, the Saints suffered two penalties, costing them 16 yards and moving them to 3rd and 17 on their own 23 yard line. The Saints quarterback attempted to run the ball, but was stopped by Dalverny, costing Lutheran another 5 yards. With 8:30 left in the game, the Saints punted to the good guys. At this point, seeing the refs throw those bright yellow handkerchiefs onto the field was almost a casual pastime. After a flag against the Raiders, they began their next drive on their own 49 yard line, just beyond Lutheran territory. 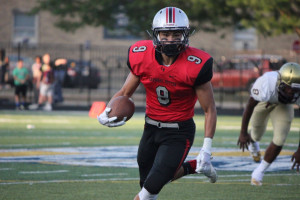 Knutson charged past the Saints’ defense for an 18-yard first down. Small picked up 8 yards of his own, followed by another yard on 2nd down by Knutson. After a loss of a yard on 3rd down, Knutson, backed by the ironhearted Raider O-line, pushed through for a short first down. “Supreme” Small and Knutson picked up an additional 6 rushing yards with the next few plays which left the Raiders with 4th and goal with 4 yards to go. 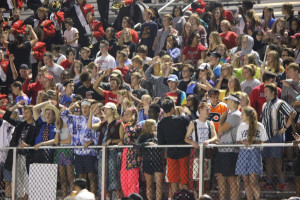 Small hit Bacon for the 4 yard touchdown with 3:08 left in the fourth. After “Ironfoot” kicked the PAT for another point, the Raiders returned the ball to the Saints at the Lutheran 20.

Despite a complete pass on first down, the Saints were still charged with a flag, forcing them to repeat first down from their own 15 yard line. Again, they tried to make a completion, but fell short as the Raiders nearly picked it off for an interception. On 2nd and 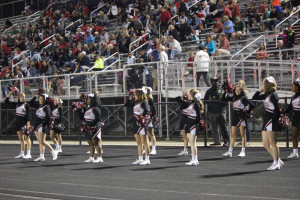 15, the Saints completed a pass for 11 yards, but couldn’t gain the first down as Dalverny brought a stop to the play. Lutheran managed to gain three more 1st downs, hindered by a one-two punch combo of 10-yard penalties and Raider linebacker Reid Swails.

The Saints completed another pass and the Raiders were flagged during the play which gave Lutheran a couple extra yards. The Saints lost five yards on first down at the Raider 11 yard line and called a timeout. With 32 seconds left in the game, the Saints completed a 16-yard touchdown pass. Unwilling to go for the point after, Lutheran attempted a 2-point conversion, but were stopped by the ever-intense Raider defense.

Still fighting to pick up a last-second advantage over Ritter, the Saints made an onside kick, but linebacker Parker Mead was quick to scoop up the ball at the Saints 42 yard line. Deciding not to tempt the Hand of Fate, the Raiders knelt the ball on the next play, allowing the clock to run down and securing their second consecutive victory of the season.

After the game, tight end Henry “Napalm” Woodcock was asked just how exactly the Raiders managed such an unbelievable turnaround after halftime. He replied, “We went into the locker room, looked each other in the eye, and said, ‘We’re a team. We’ve been a team since freshman year, we know what we need to do.”

On offense, Small led the team and had arguably his most efficient game as a Raider going 12-14 for 215 yards, 4 touchdowns and 0 picks for a 165.2 QB rating. Leading the receivers was Kyle Price who made 6 catches for 59 yards and 2 touchdowns. Brad Bacon caught 2 balls for 94 yards and and a touchdown, Ben Egenolf picked up 1 catch for 11 yards and a touchdown and Henry Woodcock made 3 catches for 51 yards. Seth Knutson ran the ball 13 times for 37 yards.  Matthew Boberg kicked one field goal and three PATs.

Leading the defense were Trey Hunt with 11 tackles (7 solo) followed by Bryce Giebel with 7 tackles (4 solo), Manolo Suazo with 6 tackles (5 solo), Kendall Dalverny with 5 tackles (all solo) and 1 sack and Jake “The Snake” Kluemper with 5 tackles (3 solo).

The Raiders will play the Brebeuf Braves next Friday, September 1, at Marian University. The game will begin at 7 pm. Go out and cheer on your Raiders!