The 2018 Varsity Boys Volleyball Team has very high expectations for the 2018 season. The team hopes to once again be hosting a regional tournament and this year, come away with the first regional championship in the program’s history. The team lost two players to graduation, outside hitter Lucas Roberts and defensive specialist Griffin Koester, and returns all but one starter from last year’s team that finished the season 22-9, losing in the championship match of the regional tournament.

The team has a very strong nucleus of experienced seniors. Five of the seniors were varsity players on the first boys’ volleyball team in CRHS history. Setter Will Roberts, middle hitter Eric Krumm, defensive specialist Matthew Walters and libero Josh Strati not only return for their 4th year in the program, but all four of these young men are 4-year starters in their respective positions. Charlie Magan returns for his 4th year in the program and will be transitioning into a new role this season as a defensive specialist. Additional returning seniors include Tharran Cook at middle hitter, Mike Isakson at outside Hitter, and Sean Bennett at opposite. Newcomer Ben Egenolf joins the program as an outside hitter. The two returning juniors on the team both bring varsity starting experience with them, Cade Merrill as a returning defensive specialist who will also see some action as a setter and Josh Christian as an outside hitter.

The varsity as well as the JV team participated in the Lafayette Jeff Scrimmage on Saturday. The scrimmage consists of a series of timed sets of play, with no officials and no scoreboards. Both squads competed against teams from Jeff, Fishers, Lawrence North, Columbus North, Noblesville and Avon. The JV gained valuable game-like experience with the benefit of coaches and varsity players positioned around the court. The Varsity performed well against their competition and was able to run a second offense to see what options might be available to the team this season.

The varsity opens their regular season at Beech Grove on Monday, March 12. Both teams are in action at Hamilton Southeastern on Wednesday, March 14. The home opener is Monday, March 19, where we will be recognizing CRHS faculty and staff at the  first Faculty/Staff Appreciation Night just prior to the start of the JV match at 6pm, Varsity match to follow.

The pictures are from our lunch break at the scrimmage and the six seniors who have been with the program for four years, the five players and manager, Cici Koester. 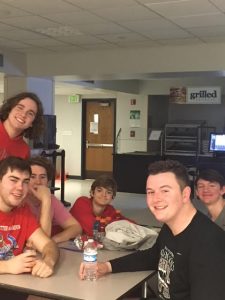 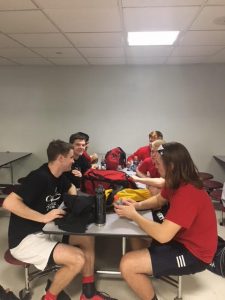 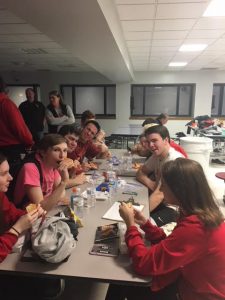 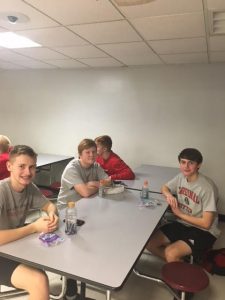 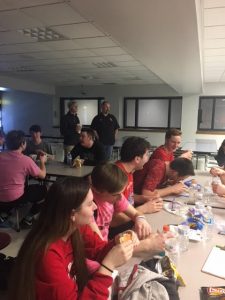