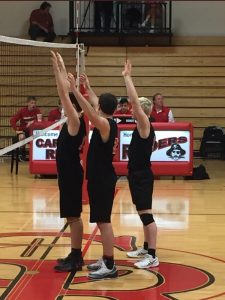 Just prior to the first home match for the Cardinal Ritter Boys Volleyball Team’s 2018 season, the Raiders took time to recognize all CRHS Faculty and Staff in attendance at Monday’s match. There were six people chosen for special recognition by the volleyball program, those individuals were Mrs. Hoy, Mr. Martin, Mrs. Koester, Mrs. Jones, Mrs. Bryant and Mr. Cavanaugh. The team was quoted in saying “We appreciate all the love and support we have received from everyone in our Cardinal Ritter Family. The atmosphere was awesome in the gym tonight, it is wonderful to be able to play in front of a full house. In addition, a special shout-out to the TV Broadcasting Crew for all of their work in doing the live stream of tonight’s match, the early reviews have been very favorable.”
The Varsity Raiders did not disappoint the home crowd tonight, defeating Guerin Catholic 3-1 (25-16, 22-25, 25-16, 25-15) in a match filled with many spectacular plays. Eric Krumm provided a number of great plays on the night, including 5 solo blocks and 2 block assists. Will Roberts ran an efficient offense, connecting with seven different hitters and picking up a season high 39 assists. Krumm led the team in kills with 12, Josh “JC” Christian and Mike Isakson each added 8 kills, Tharran “T-Bone” Cook had 6, Ben “The Jet” Egenolf, Josh Strati and Roberts each contributed 3 kills. There were three Raider players with hitting percentages at 500 or above, Mike Isakson was 8 for 13 with no errors (.615), Krumm went 12 for 20 with 1 error (.550), and from the back row Strati was 3 for 6 with no errors (.500).
The defense played amazing, amassing 81 digs as a team. Strati led the team with 26 digs, Roberts and Matthew Walters had 11, Christian had 9 and Cade Merrill added 8. From the service line Roberts was 23 for 24, Merrill was 15 for 16 with 2 aces, Strati was 16/18 with 1 ace, Christian was a perfect 12 for 12 with 2 aces. 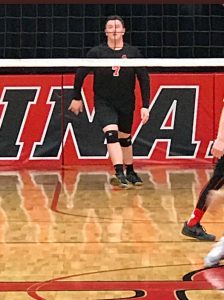 The JV Raiders are now 2-0 on the season with a straight set win over Guerin Catholic, 2-0 (25-20, 25-14). Serving looked great for several of the JV Raiders,, Ben Yetter went 16 for 16 with 2 aces, Zane Middaugh was 7 for 7, Elliot Domogalik went 4 for 4, Eric Diaz was 3 for 3 with 1 ace and Bobby Isakson was 3 for 3. Michael Kozlowski picked up 15 assists and 5 aces leading the offense for the Raiders from the setting position. Bobby Sulecki picked up 6 kills on the night while John Wagoner and Patrick Keating each added 4 apiece. Yetter led the team in digs, grabbing 13 while Middaugh added 7 and Diaz had 4. 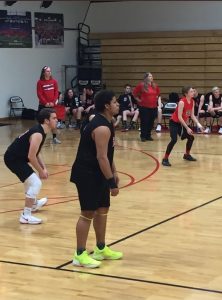 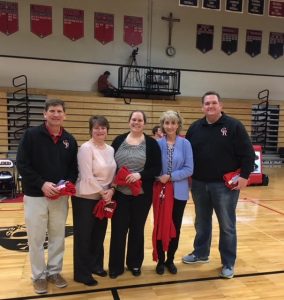 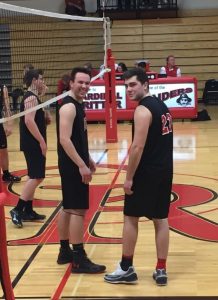