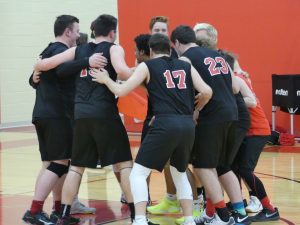 The volleyball team traveled to Covenant Christian High School and came away with straight set wins for both the Varsity and the JV. Varsity finished 3-0 (25-12, 25-12, 25-17). From the service line the team went 70/73 with 10 aces. Will Roberts, Eric “Cookie” Krumm, Matthew Walters and Josh “JC” Christian were all perfect from the service line.  Cade Merrill had 4 aces, Roberts had 3, Krumm had 2 and Walters added 1 ace. The offense attack was well balanced with nine Raiders picking up kills. Krumm lead the team in kills with 8, Christian was a close second with 6 kills, a host of Raider hitters had 4 kills on the night including Merrill, Tharran “T-Bone” Cook, Ben “The Jet” Egenolf and Sean Bennett.  Roberts had 3 kills, Josh Strati added 2 and Walters had 1 kill. On the defensive side of the net, Mike Isakson, Roberts, and Cook each had a solo block. Merrill led the team in digs, grabbing 23, Strati added 12, Roberts and Walters each picked up 8 digs.

The JV team finished their match against Covenant Christian 2-0 (25-12, 25-22). Michael Kozlowski ran the offense from the setting position, he had 15 assists on the night, went 11/12 from the service line with 1 ace and had 9 digs. Bobby Sulecki led the team in kills getting 9 in the two set match, Patrick Keating and Stephen Starsiak both added 2 kills. Mark Adolay, Elliot Domogalik and Zane Middaugh were perfect from the service line, Middaugh also had 3 aces, while Adolay had added 1 ace. On defense, Middaugh led the team in digs, scooping up 13, Ben Yetter and Adolay added 6 digs a piece, Bobby Isakson and Eric Diaz each contributed 4 digs for the match.

The varsity record stands at 10-2 and the JV record stands at 9-2 before their spring break. Both teams are back in action at home on Tuesday, April 17 against Fisher High School. April 17 is CYO night – all West Deanery Boys Volleyball Players are encouraged to attend the match. All boys in attendance will be recognized prior to the start of the Varsity match and will be entered in a drawing for Raider Volleyball T-shirts and other fabulous prizes.