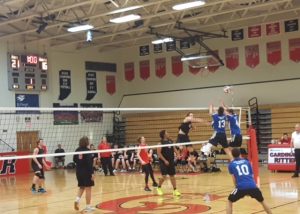 It was two marathon matches in the gym on Monday evening, but both Varsity and JV came away with victories. Once again, the varsity played with a lot of heart and mental toughness. They defeated the Columbus North Bulldogs 3-1 (25-16, 25-21, 20-25, 25-23). The Varsity team played without their primary setter, Will “The Thrill” Roberts, and every other player on the team stepped up in at least one aspect of their game. Cade Merrill filled in for Roberts at the setting position and did an outstanding job, the opposing coach was very impressed with the job done by the “back-up” setter. Tharran “T-Bone” Cook chased down a “do or die” ball to the end line, free-balled it over the net and made it back to his middle-blocking position with enough time to get a touch on the very next hitting attempting. Josh “JC” Christian never left the court in 4 sets of play and has the dig stats to prove it. Josh Strati “Sphere” led the team in serves, aces, digs and serve receive effectiveness – playing all of set 4 and most of set 3 on a bum ankle. Eric “Cookie” Krumm led the team in kills, hitting percentage and blocks. Sean “Dean” Bennett recorded his first ever assist in tonight’s match. Ben :The Jet” Egenolf and Mike “Iron Man” Isakson both had hitting attempts with their off-hands – unselfishly doing their part to make every set count. And finally, Matthew Walters and Charlie Magan both stepped up with serve receive game since Merrill was missing from that usual spot and picked up their defense, especially late in set 4 when Strati was struggling to move. The team was down 18-21 in set 2 and 20-21 in set 4 and managed to come from behind and win both of those sets. 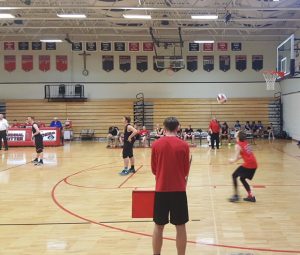 Merrill finished the match with 32 assists while effectively spreading the offense out to all 6 of his hitters this evening. Krumm was on the receiving end of over half of those sets as he collected 18 kills on the night, followed by Egenolf with 7, Cook and Christian each had 6, Isakson picked up 2 kills while Bennett and Merrill each had one kill. Krumm finished with a hitting percentage of .581 going 18 for 32 with 1 error. The Raiders accumulated 13 blocks as a team tonight, Krumm had 6, Bennett and Cook had 2 a-piece, while Merrill, Christian and Egenolf each had one block.

From the service line, Strati was a perfect 23-23 with 3 aces, Merrill was also perfect at 16-16, Magan, Walters and Christian and Krumm each had 1 ace a-piece. Strati led the team in digs collecting 27, Christian added 17, Merrill had 10, Magan had 9, Krumm had 4, Walters and Egenolf had 3, Bennett had 2 and Cook had 1.

The JV Raiders needed all 3 sets, but they got the win 2-1 (25-24, 24-25, 15-11) – once again ensuring that the fans in the stands got their money’s worth since 124 of the 127 points possible were scored. The JV Raiders weren’t without their own adversity as they had were forced to play without two starters, due to illness and a college visit. With the Raiders down 17-23 in set 1, Coach Allard called a time-out. The next play resulted in side-out. And with the score 18-23, Ben Yetter steps up to serve and manages to get within one at 22-23, before missing his serve. The Raiders quickly got a side out and Zane Middaugh serves for point 24 and 25 and the Raiders got the win. The Raiders found themselves in a similar situation in set 2, and just couldn’t string enough points together to pull out the win. In set 3, the Raiders trailed until the score reached 6-6 and then managed to carry a slim lead through the end of the set to win the match. 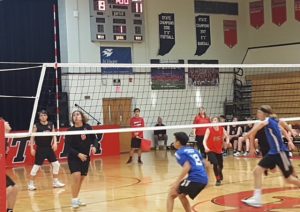 Michael Kozlowski dished out 16 assists and Bobby Sulecki had 12 kills, going 12 for 24 with zero errors. Zane Middaugh and Patrick Keating each had 4 kills, while John Wagoner added 3 kills. Keating, Sulecki and Wagoner each had one block tonight. Mark Adolay led the defensive with 15 digs, Kozlowski added 10, Yetter and Eisele added 8 each, Diaz had 7 digs, Wagoner added 3 while Sulecki, Starsiak, Keating and Middaugh each had 2 digs a-piece. Adolay also led the team in aces with 3, Yetter had 2, while Sulecki and Kozlowski each had 1. 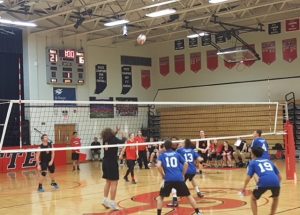 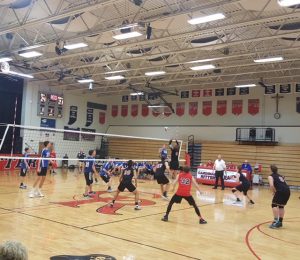 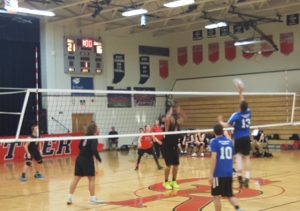