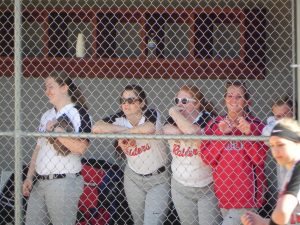 The Lady Raiders Softball Team won their 5th straight game Wednesday Night with a walk off single by Annie “The Natural” Kluemper in the bottom of the 8th inning. The Raiders have been hot in all aspects of the game and Wednesday they met a formidable opponent in The Lafayette Jeff Broncos.  They looked adversity in the eyes on Wednesday and never thought about giving up, rallying around each other for the 5-4 win.

The Raiders were down 4 to 3 in the bottom of the 7th when Kluemper laid a bunt down for a single, Jenna :Pure Athlete” Purichia hit a hard ground ball up the middle to advance Kleumper to third. Then Taylor “The Falcon” Faulkenberg hit a hard ball at short to score Kluemper to tie game up.

In the bottom of the 8th Megan Lewis singled in to left center and Maddie “3 Bomb” Briggeman singled up the middle. Carson Heim laid a bunt down to load the bases with one out. Klumper then did what she has done so many times before and hit a hard up the middle scoring Lewis for the walk-off win.

Lauren Beaman started on the mound striking out 7, Faulkenberg came in for 2 innings and struck out 6. The offensive leader was “The Natural” as she went 4 for 5 with 3 singles, 1 triple and the big RBI in the 8th. 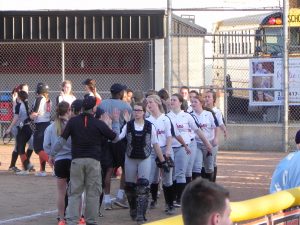 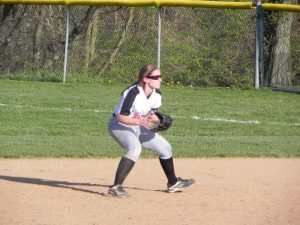