The Cardinal Ritter Raiders Boys Soccer Teams played in their first Indiana Crossroads Conference game on Tuesday against arch rival, Speedway and both team came away with victories.  The JV started off first and the varsity came through and dominated the possession in a highly physical game.
The varsity Raiders started out fast with a constant attack on Speedway’s defense, but struggled to find the back of the net in the early stages of the match. After 30 minutes of play, Andy “Bend It Like” Bonilla managed to break the dry spell when he slotted the ball into the corner of the net off a pass from Eric “Man Mark” Martinez. Cardinal Ritter stayed on the offensive and were rewarded as Scott Roggeman and Martinez added to the lead before going into the half.   The “Law Firm” of Hofer, Hofer and Hofer controlled the tempo of the game on both sides of the ball.
A strong defensive effort and some excellent goalkeeping from Hayden “Grinder” Grider in the second half allowed the Raiders to coast to a 3-0 victory and secure their first win in conference play. 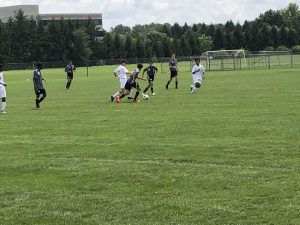 The JV team won their first conference match of the season as well. The Raiders started the night off with what began as a tight match, but the Spark Plugs weren’t able to keep the Raiders off the scoreboard for too long, as John Ronquillo scored his first goal of the season on a cross from Victor Cervantes. The Raiders would take their 1-0 lead into halftime.
Speedway was able to tie it up earl in the the second half, but the Raiders responded to the pressure with the winning goal coming from Victor Cervantes header from a corner kick by Octavio Hernandez-Rangel for a 2-1 victory.
The JV Team is back in action Wednesday as they head to Danville for a 6 PM game.  Both Teams are coming back to Cardinal Ritter on Thursday as the Raiders host Tri-West.  JV will begin at 5:30 with Varsity to follow.
Oct
30