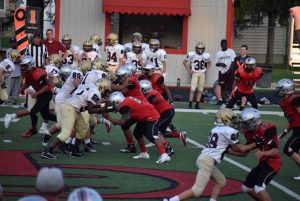 The JV football team took on the Brebeuf Braves last night coming up on the short side of the scoreboard. A few miscues early put the Raiders in a deficit, but the team gathered themselves after two turnovers that led to the Braves scoring and fought hard the rest of the game. 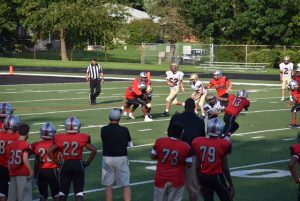 The Raiders were led in tackles by Ellie Gerth and Jaden Brock. Gerth made most of the calls for the defense and did a great job of helping get things organized on the field. Freshman Will Tune stepped up big making a big hit near the goal line on a pass play by the Braves. Tune also broke on a pass and picked off a pass before the 2nd quarter ended giving the Raiders an opportunity to try and score. The offense was led by quarterback, Nate Cmehil. He did a great job of avoiding the pass rush and completing passes. Cmehil completed several passes to Jordan Johnson and freshman Nate Sims. The Raiders continue to work on the individual assignments that will help the team grow and get better collectively. 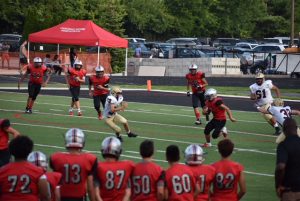