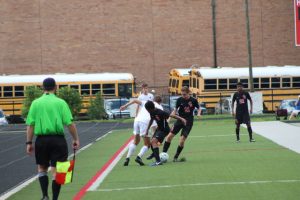 The Cardinal Ritter Varsity Boys Soccer Team has been on a roll since their slight hiccup against Pike last week.  They began the week ranked #2 in 2A  and rattled off two impressive wins to stay in the top 5 in the state.  The JV Team has followed suit, showing that this Raider program is a force to be reckoned with.  The Varsity team started off by beating International School on Thursday to a tune of 11-1 then following that “W” up with a victory over perennial powerhouse Avon, 2-1.

On Thursday, the Raiders traveled to International take on the Gryphons. The Raiders started the game a little slow, but at the midway point in the first half, Jose Chavez made his mark on the scoreboard off a feed from Chris Murray. The score would stay at 1-0, until less than 10 minutes left in the half, Cardinal Ritter put in a flurry of goals from Chris Murray, Aaron “Hollywood” Hofer, and Collin Smith.

The attack would continue at the start of the second half, as Andy “Bend It Like” Bonilla and Irvyn Gutierrez each added 2 goals in 10 minutes to take the lead to 8-0. Bonilla wasn’t done yet though, and would add another 2 goals to his tally late in the game with the final goal coming from Jose Chavez for an 11-1 win. Ryan “High Press” Hofer led the team with 5 assists on the night. 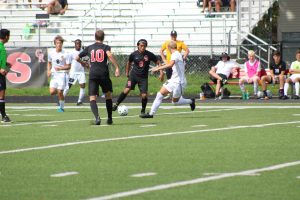 On Saturday the boys hosted Avon.  The JV team kicked things off first and found themselves in a back and forth match from the first whistle. Edgar Gomez struck first on a free kick to put the Raiders up 1, 10 minutes into the game. The Raiders would continue to hold strong for the remainder of the half and take their 1-0 lead into halftime.
Cardinal Ritter started the second half with a couple of good opportunities on goal, but failed to get one past the goalkeeper. A few minutes later, Avon was on the attack and capitalized on their opportunity to bring the game level at 1-1. The Raiders pushed hard to regain their lead, but ultimately would give up another goal, with under a minute to play, on an Avon counterattack for a 2-1 loss.
The Varsity Team took the field next and found themselves in a tight match as well. After 23 scoreless minutes, Ryan Hofer took advantage of some lax defense from the Orioles, and was able to get a quick throw in to Jose Chavez, who pulled the Raiders out front 1-0. The defense remained strong and the Raiders would close out the half with their 1-0 lead. 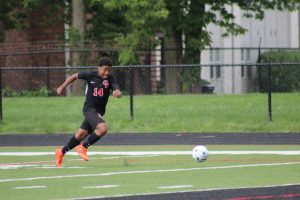 Avon started out on the attack in the second half and didn’t wait long to bring the game back to a 1-1 tie. Cardinal Ritter was determined to come out with their first win against the Orioles, and after 30 minutes of play in the second half, they would have their best opportunity to do so. After a handball in the box on a cross from Will Marshall, Aaron Hofer lined up from the PK spot and smashed one past the keeper to retake the lead. The Raider defense stood strong for the remainder of the game against some frantic attacks to seal deal at 2-1.
The Raiders are back in action Thursday as they take on Lutheran.  The JV Team will play Wednesday in a game against Ben Davis.
Oct
23