The Cardinal Ritter Girls and Boys Cross Country Teams both won the Indianapolis City Championship this past Saturday.  The Girls Team won 39-36 over second place Cathedral and the Boys Team wiped out the competition easily beating second place Chatard.

The boys victory would not have happened if Wil “Stride” Stamm had not keep running after his calf locked up.  He hobbled most of the second half of the race, just like Kirk Gibson did around the bases in the 1988 World Series, yet stayed the course and helped his team win the 2nd CC Boys City Championship, the team’s first since 2014.  His gutsy performance also earned him All-City honors, placing 7th.  His brother, Paul “Streaker” Stamm ran away from the field and easily won the City Championship.  The boys had two other All-City runners for a total of 4, Peter Sperry 4th and Mitchell Jacob 6th, both by far ran their best race of the year.  Eli Bush stayed strong and finished 12th and Wesley “19” Kochell finally broke the exclusive 20 minute barrier in a PR time of 19:36.  Great job Wes! 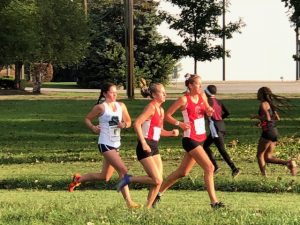 The Girls Team was focused all week in practice and were very nervous Saturday morning as they were warming up.  Mariah “MUT” Wehlre won her first City CC championship to go along with her 800 win in 2018 City Track meet.  She barely edged her sister Mary Anna “Marathon” Wehrle who placed 2nd by .3 of a second. Jenna Gruber was also All-City placing 8th and she ran her best race ever, staying close to a girl that has run in the high 19’s.  If she did not do this, the Lady Raiders would not have won.  Like many times, the race ended up being in Hannah “Kick” Wells hands, as she seems to always do. Few are able to do when totally exhausted, but she dug down deep, holding off runner behind her, basically sealing the victory.

Coach Ford got a big smile from Wells afterwards when she told him humbly yet with pride, ”there was no way she was going to beat me Coach”.  Those heroics would not have been possible without our amazing freshman, Sarah “PR” Jacobs, who was one of two girls that had a PR and to do it on this course. 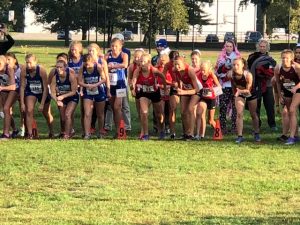 The Raiders had 2 All-City freshmen performers who both ran PRs as Nicholas “Pickle” Mark placed 4th in the boys freshmen race and Sophie Konger placed 10th in the girls.  The biggest PR was by Sam Fitzgerald by 4 minutes as he never slowed down.  He was on a mission!  Greg Meriweather chopped off another minute on his PR.  Issac Briggeman and Dominic Oaldon ran strong races breaking their PRs as well.

Caoch Ford said after, “The Stars of Meet are very easy for me to decide despite all the great performances and many deserving runners.  It was Wil Stamm for what he did and Mariah Wehrle for winning her first City.”
After the ceremonies on this crisp beautiful Indiana morning where Coach Ford was congratulated by many other coaches, he gathered all the runners and told them to enjoy and appreciate what they just accomplished and it took all of them not just the varsity runners. 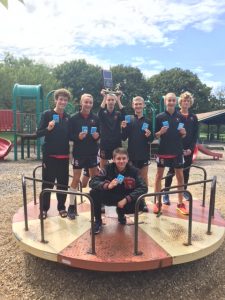 Coach Ford commented, “I told them they were just part of something very special and one the biggest sporting accomplishments in CR history.  At the beginning of the day, CR had 9 City Championship teams and now we have 11 as you just won TWO or about 1/5 all City Championships!”
Great job Raiders!!! 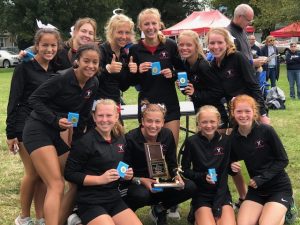 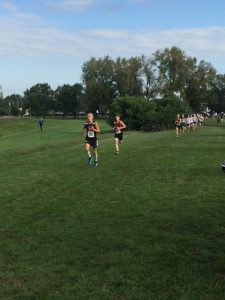 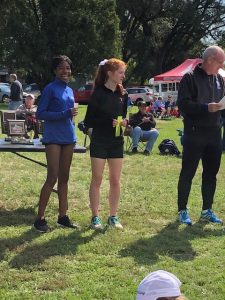 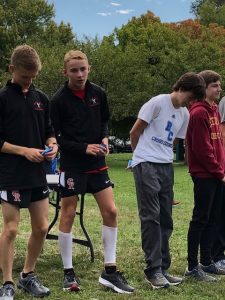 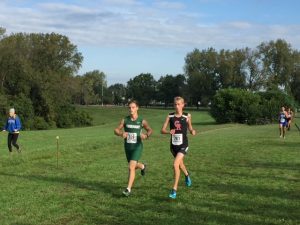 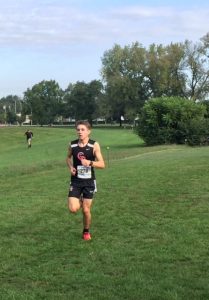