The Cardinal Ritter Booster Club Athletes of the Month of September are Grace Arm “And Hammer” Bruster and Paul “Streaker” Stamm. 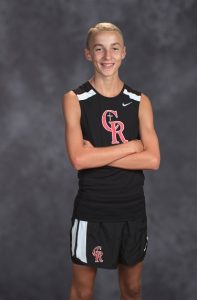 Paul Stamm (Sophomore) Boys Cross Country – Has raced against over 600 runners in September and has only lost to 9.  Eight of them at the elite Marion Invite.  He lead his team to victories in The Golden Spike Invite (first time we have ever won), The Culver Invite, the Indianapolis City Meet which the boys won for second time ever and was Cardinal Ritter’s 11th City championship in all sports in school history.  In the 55 year history of Cardinal Ritter, Paul is our first runner to win individual City.  He is the 9th ranked sophomore in the state.  Paul is the fastest sophomore I have coached in my 9 years here and the second faster runner over all. 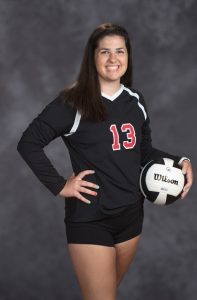 Grace Armbruster (Senior) Volleyball  Grace is a senior captain for the team and is also our go-to hitter.  She leads our team in kills with 204 which is 69 more kills than the next closest hitter.  Grace also has the highest hitting percentage of all the hitters with .230, which means that Grace is not erroring as often as other hitters.

Grace has had 14 or more kills in 5 matches this season which is a great accomplishment considering we have not had any 5 set matches this year.  Grace was a huge part in our victory over Covenant Christian on our dig for the match, she had a career high 19 kills, as well as 10 digs.  She has also had 8 matches where she has had a hitting percentage over .300, and 4 of those matches she had a hitting percentage over .400.  This again proves that while Grace can score for the team she does not error very often.  Grace is second in conference for hitting percentage and she is 8th in the conference for kills.

Grace is clearly a great volleyball player, but she also sets a very good example for the younger girls in the program.  She is always doing what she is suppose to do, she pulls put things away and clean up the gym/bus, and she always does it with a smile.  She is a great representation of the CRHS volleyball program.