For the first time in Cardinal Ritter High School history both the Girls and Boys Cross Country Teams advance to the IHSAA Semi-State in the same season!!! 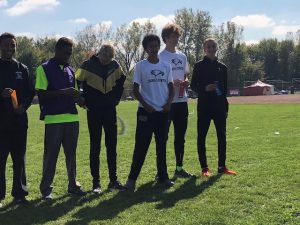 It was a beautiful, crisp and sunny October morning on Saturday when our Raiders traveled to Ben Davis for this year’s Regional Championship.  It ended up being the greatest day for Cardinal Ritter cross country runners ever!  For the first time, the Girls Team advanced to the Semi-State as they finished 2nd overall.  Higher than any Raider Cross Country Team ever.  It was also the first time Cardinal Ritter produced an individual Regional Champ when Paul “Streaker” Stamm crossed the finish line first in the boys race.

In the boys race, Peter Sperry led the middle pack of Mitchell Jacob, Wil “Stride” Stamm and Eli Bush for the first 2 plus miles. “Stride” put up a herculean effort as his legs locked up in mile 2 but still toughed it out for the entire race to help the Raiders narrowly beat Perry Meridian and Plainfield.  Jacob and Bush both ran PRs and passed multiple runners on their way to the finish line.  “Streaker” did exactly that in his last 600 meters as he went from 3rd to the very front in an amazing burst of speed at the end. 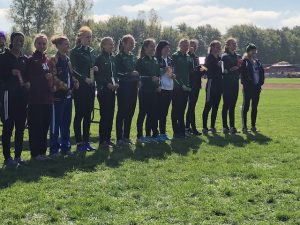 The Lady Raiders placing 2nd overall led Coach Ford to proclaim, “The 2018 Girls CC in the greatest CC (team) ever at Cardinal Ritter, replacing the great Boys Team of 2014.”  The placed higher than any team ever has.  Like the boys, it took every one of them to succeed.  “Marathon” Mary Anna Wehrle ran a season best and finished 3rd, followed by Mariah “MUD” Wehrle who placed 4th and also earned a PR.  The key to the team’s success was the next three runners who smashed their previous PRs.  Hannah “Kick” Wells passed a host of runners to place 12th, beating 8 runners that placed above her at the Sectional.  Her running partner, Jenna Gruber came in right behind at 17th overall.  Gruber found some extra strength at the end asking Coach Ford, “Did you see me pass that girl at the end?” Sarah Jacob beat her time by a whopping 40 seconds.

Coach Ford said after the meet, “There were 14 stars Saturday and each played their role.  The first I have done this… there will not be an individual star as the theme of “Team” was evident Saturday.  It takes a team to achieve our goals and become great.  All are the Stars of the Meet!”