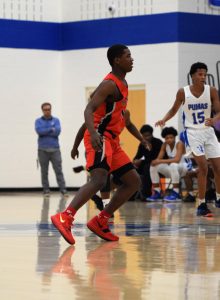 The Cardinal Ritter Boys Basketball Team played in back to back nights this weekend starting off with playing at Indianapolis Metropolitan on Friday, then turning around and opening Indiana Crossroads Conference play at home against Lutheran.   The Raiders played hard in both games and came away splitting the weekend going 1-1.

The Raiders lost on Friday Night to the Pumas 67-58.  The Raiders racked up several fouls in the 2nd half, and the Pumas were able to capitalize shooting 74% from the foul line.  Leading the Raiders was “Nasty” Nate Soltis with 14 points and 7 rebounds.  Joey “Gamer” Gruber and Marlon “Hot Shot” Anderson added 11 points each. Dan “O-Mite” Bayler also added 10 points for the Raiders.  Even with 4 players in double figures, it just wasn’t enough.

The JV Raiders beat the Pumas for their first win of the season 54-40.  “The” LaDarryl Woods led the offensive attack for the team. 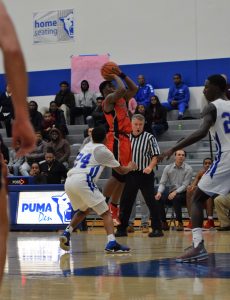 The Raiders then opened up Conference play with a 66-45 win over the Lutheran Saints.  The Raiders defense led the charge forcing several turnovers in the first quarter to open up the game with a 15-1 run.  Raiders Senior, Gruber led the Raiders with 16 points, and 12 rebounds.  Bayler added 12 points, and Soltis, playing injured had 8.  Sophomore, Aidan Cannon finished with 8 as well having his best game of his young career.
The JV Raiders lost a tough game to the Saints 45-42.  In a tight game that saw several lead changes and ties throughout, the Saints were able to knock down free throws to seal the deal.
The Freshman Raiders defeated Lutheran 40-32 for their 2nd win of the season.  Jordan Turner led the Raiders with 14 points. 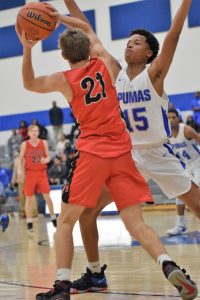 The JV and Varsity team will be back in action Tuesday at Decatur Central.  The game will be a boy/ girl double header with Varsity playing in the main gym, and the JV in an auxiliary gym.
Jan
25