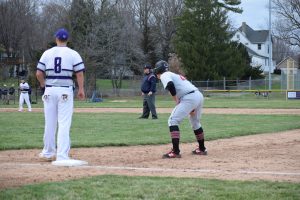 After a cold, rainy and snowy winter, the baseball season is finally upon us.  The Cardinal Ritter Baseball Team has worked hard, not only on their craft, but on the field to ensure the season could start without a hitch.  In doing so, the Raiders started off with a loss to Greencastle last Tuesday, but followed that up with two wins against Western Boone on Saturday and another win Monday against last year’s Sectional winner, Tri-West to begin their season 3-1.

In the first game of the season, the Raiders pitching was outstanding as Damien “Llama” Wallace took the hill throwing a complete game loss.  In the loss Wallace only gave up 1 hit and 1 earned run on only 78 total pitches, as the team lost 2-1.  McCracken field is finally thawed from the winter, but the Raiders bats were not as they could only gather 5 hits on the day while striking out 8 times.  The defense looked sharp as there were no errors on the day. 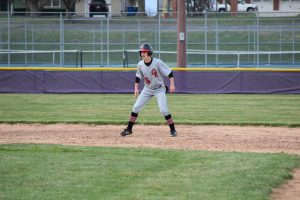 Aaron Roberts led the offense going 2-3 on the day.  Grant Eifert, Damien Horton and “Go” DJ Boggs all collected 1 hit a piece.  The only run was scored by Joey “Gamer” Gruber when he led off the 5th inning with a walk.  He then stole second, third and home, electrifying the Raiders for a short time.  Unfortunately it was the only time the team could push a runner through as they left 8 runners on base throughout the day. 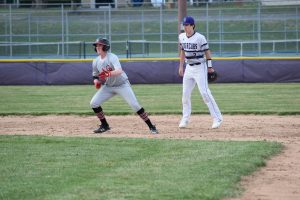 In their second game of the year, the Raiders were home against WEBO.  The Raiders looked flat in the beginning as they spotted the Stars 3 runs in the first.  Gruber game up in the bottom half of the inning and led off with a home run over the right center wall.  The Raiders got 2 more in the second but allowed WEBO on e more in the 4th.  With Cardinal Ritter down 3-4 in the 6th Gruber led off by reaching on an error.  He stole second and third before Grant “G-Man” Eifert hit a sacrifice fly to center to score Gruber and even the score at 4.

The game went into the 8th inning as Gruber took the mound for Boggs and picked up the win in the 8th.  Gruber led the 8th with a walk, but got caught stealing.  Eifert earned another walk, stole second, then with two outs, Roberts hit the walk off single to scored Eifert from 2nd.

Boggs started on the mound and pitched well in his first outing of the year striking out 12 over 7 innings.  The offense had 8 hits in the game, but still left 12 runners on base.  Gruber led the way going 2 for 4 with the home run, an RBI and 3 stolen bases.  Eifert, Le’Ron “Mr. Magnificent” Fleming, Roberts, Wallace, Boggs and Horton also picked up hits.

In game two of the Western Boone double header, both offenses struggled as only one run was scored in the contest.  Wallace took the mound again and pitched masterfully, only giving up 1 hit in the 1st inning while striking out 15 and walking only 1.  The Raiders offense had 4 hits, but only struck out twice as they were hitting hard balls right at the defense.

The lone run was scored when Gruber hit a double to lead off the fifth, was moved over by a ground ball by Eifert, then scored on another ground ball by Fleming.  Roberts, Boggs and Wallace all hit singles in the game.  The Raiders still left 6 runners on for the day, and added 2 errors (their first of the season), but found a way to grind through and pick up the win.

In Cardinal Ritter’s fourth contest of the year, they took on the Bruins of Tri-West.  The Raiders offense went to work quickly as they scored 5 runs in the first.  They sat back on their heels as they gave the Bruins 2 runs in the second and another 1 in the 3rd after the CRHS scored 1 in the second.  Tri-West battled back and brought the score to 6-5 in the top of the fifth.  The Raiders then exploded for 6 runs in the fifth to go up 12-5.  The Bruins scored 1 in the sixth and seventh but it was not enough as the Raiders won 12-7.

The Raiders gathered 8 hits on the day and only left 5 runners on base.  Roberts was hot at the plate going 3-4 with 2 RBI.  Wallace was close behind going 2-4 with an RBI.  Eifert, Horton and Jack “Rabbit” Henninger all had hits as well.  The defense was solid only allowing 1 error.

Gruber had his first start of the year and allowed 9 hits and 4 walks, but as always, he settled in when it counted to pick up the win.  Drew Matter saw his first action on the mound coming in in the seventh to finish the game.

The Raiders are back in action Wednesday, Thursday and Saturday as they host Eastern Hancock, Clinton Prairie and City Opponent, Heritage Christian.