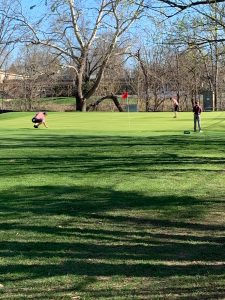 The Raider Linksters dropped a close match to Scecina at Pleasant Run, 198-193. Kevin “Tap In” Tillery led all scoring with a one over par 37, earning him Medalist honors. Rounding out the Raider’s scoring were Austin Mohr with a 52, Reed “The Terrapin” Turpin with 54, and John Wagoner with 55. The Raiders were leading by three strokes until Scecina’s number five golfer posted a score of 50, replacing a score of 58, giving Scecina the win by five strokes.

The Raiders return to the links on Thursday against Brebeuf. The match tees off at 4:30 pm at Golf Club of Indiana. On Saturday the Raiders play host to the Ritter Classic at Eagle Creek Golf Course, starting at 8:00 am.

After Scecina the Raiders took another tough loss to top 10-ranked Brebeuf, 159-199 at Golf Club of Indy.  Kevin Tillery took medalist honors with an impressive round of one under par 35 while battling high winds.  Reed Turpin turned in a round of 46, followed by Austin Mohr and John Wagoner with a pair of 59’s.

Next for the Raiders is the Cardinal Ritter Classic Invitational this Saturday morning at Eagle Creek Golf Course.  The field of 12 teams tee up at 8:00 AM. 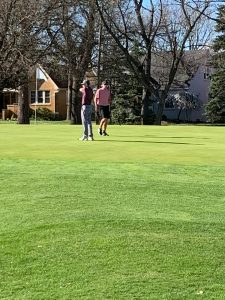