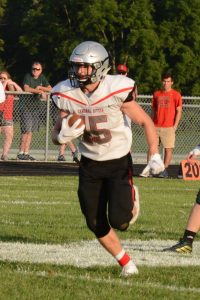 The Cardinal Ritter Football Team opened the season on Friday as they traveled to Monrovia to take on the Indiana Crossroads Conference Bulldogs.  The atmosphere was electric as the Raiders gave their fans a show in their first outing of the year coming away with a 14-6 victory.

The Raiders received the ball first and began their season getting a first down on the first drive but being forced to punt the ball away.  You could see early, that the Raiders were more athletic, but the typical first game jitters were upon them.

The ball went back and forth the entire first quarter with no one scoring. Finally, with 6 minutes to go in the first half, the Raiders drove down the field and capped off the drive with a 6 yard touchdown pass from Jack “Rabbit” Henninger to Raider rookie Justin Browder.  Ben Valle kicked the extra point through to give the team a 7-0 lead.  A lead Cardinal Ritter would eventually keep for the entirety of the game.

The Bulldogs wouldn’t give up though as they answered the first punch with a counter of their own by driving the ball down the field and scoring on a 11 yard rush.  They could not convert the extra point which kept the lead in Cardinal Ritter’s favor.

The game was tense throughout the first half with some hard hits and some great offensive plays by CRHS and with 2 minutes left, the Raiders had to give the ball back to Monrovia with what appeared to be no chance for another offensive drive.  However, the Bulldogs gave the ball back to Cardinal Ritter thanks to an interception by Timmy Godsil. 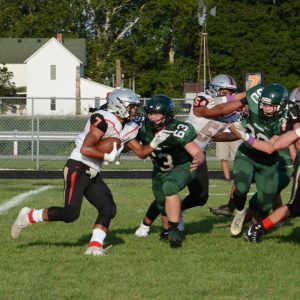 In the second half, the Raiders had opportunities to score, and had multiple long drives and big plays.  Unfortunately, the turnover bug would hit them which is typical in most first games of the season.  Even with the misfortunes, Cardinal Ritter still was able to stop any drive by the Bulldogs.  With less than 2 minutes in the game and no Monrovia timeouts, the Raiders began victory formation to come away with their first win of the season.

After the game Coach Hunt sent of the win, “The off-season was spent lifting and running routes to do one thing, Come out and win game one.  ‘Beat Dogs’ was a constant theme.”  The Raiders did just that getting themselves in the winning column on game 1.  Coach Hunt added, “Monrovia stepped to the field and brought their home town energy to the game.”  The home town energy wasn’t enough to stop Cardinal Ritter on Friday.

Henninger led the passing attack going 12-20 for 247 yards with 2 touchdowns and no interceptions for a 136.9 QB rating.  Aiding him with amazing catches and leading the receivers was Godsil with 4 catches for 100 yards.  Browder caught 3 balls or 37 yards and a touchdown followed by Nicholas Salmon with 2 catches for 65 yards, Gavin Crooke with 2 catches for 26 yards and Pagel with a 12 yard touchdown reception.  The “Round Mound Of Touchdown,” Ashton Hall led the rushing attack and kept the ball moving on offense going 12 rushes for 61 yards followed by Browder with 2 rushes for 8 yards. 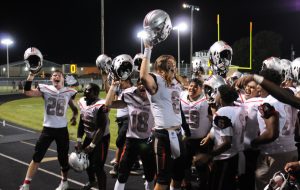 The offensive line was outstanding, anchored by Jacob “Forever” Young, not allowing one sack on the day.

Coach Hunt was happy with the win especially with how the defense played stating, “The opportunity to put more points on the board appeared and disappeared.  The defense stood when called upon and helped close the game out.” The defense was stout not allowing the Bulldog offense to gain serious momentum with the exception of the lone touchdown while sacking the quarterback twice and earning 1 turnover.  The defense was led by “Master P,” Parker Mead who had 9 total tackles and a sack.  Browder also amassed 9 tackles, 7 being solo.  Crooke, Godsil and Antwann Dix all had 8 tackles a piece.  Austin Sultzer made a splash with 5 tackles as did Aaron Roberts with Elie Gerth and Jordan Johnson adding 4 tackles a piece.

The Raiders are back in action Friday at Marian University as they compete in game 2 of the season and ICC play against the Lutheran Saints.  Game time is slated for a 7 PM kickoff. 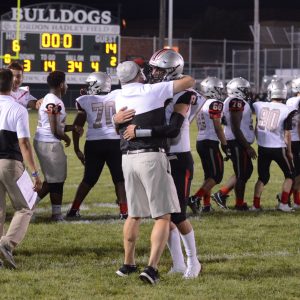