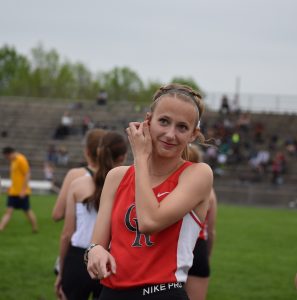 The Cardinal Ritter Boys and Girls Cross Country Teams took a trip to Huntington, Indiana to compete in the Huntington Invite.  This is one of the biggest invitationals with 19 teams competing and 18 of them being larder schools than CRHS.  Both teams fared well with the girls place 5th and the boys taking 11th overall.
Coach Ford said of the day that there were multiple themes including, “Determination, Great Weather, Tough New Course, and PRs.”
On the boys team, 6 runners had PRs, including Paul “Streaker” Stamm who ran in 15:44.3.  This was a new school record as he beat Jon Odell’s former record by .6 seconds.  The other 5 runners with PRs were Johnathan Tune, Nicholas Mar, Owen Sulecki and Aaron Anderson.  Despite the hilly, winding course and long drive, each one of these boys ran very hard and competed very well.  Coach Ford said of these guys, “I kept waiting for Johnathan to slow down, but he never did.  He, like Aaron, followed his teammates around the course to run by far his best race in 4 years.  Nicholas is starting to show his talent, and with hard work, who knows where it will lead.  It was fun watching Owen and Aaron duel it out and I imagine that is going to be the theme the whole year.” 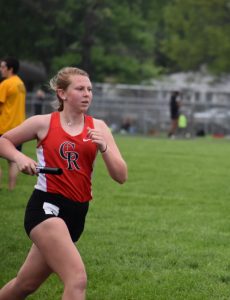 The Lady Raiders also ran well as Mary Anna “Marathon” Wherle took 3rd overall and running a PR.  “Mary Anna ran her best race as Raider, which is saying something.  She ran smart and dueled with runners 2-5 placing 3rd,” said Coach Ford of her exploits.  Jenna Gruber also smashed her PR placing 11th overall.  “At no time did I see her stumble, she was like a machine,” said Coach Ford of Gruber’s race. Adding, “I was also so proud of each them as they ran with pride and determination.”  Also having PRs on the day were Lauren Harcus and Sarah Jacob.  Jacobs and Hannah “Kick” Wells ran amazingly and at the end passed 12 girls in the last 300 meters.    Jessica Bontempo and Annie Waters ran with heart!
Coach Ford said, “The Stars of the meet on the boys side it was tough, as any other meet, Johnathan wins hands down, but breaking the school record on that course is one heck of achievement, so I have to to go Paul.  The girls should be the the whole team as they placed 5th in a tough field, yet I have to give it to Jenna Gruber for earning a podium and placing 11th in that field.”
The Raiders are back in action Tuesday at Riverside Park.
Oct
23