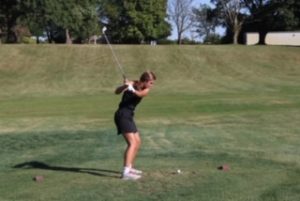 In the final match of the season, the Lady Raiders Golf Team took on the Lady Warriors of Covenant Christian in a match play competition. Lydia Schembre was all square after eight holes, then lost her match by one stroke on the final hole of the round while shooting a 43.

Megan McCall “Me Maybe” finished her round all square with her opponent, and both players shot a 46. Ella Kappel lost by three with one hole to go while shooting a 56. Zoe Viglietta lost by four with two holes to go.

On Friday the Lady Raiders will compete in the Ben Davis-hosted Sectional at South Grove. The Raiders are in Flight #3, with the first group teeing off at 1:20 pm. The Raiders are paired up with Speedway. #goraidergolf