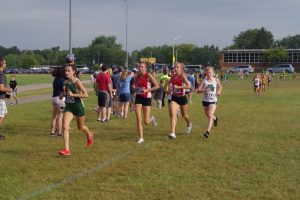 The Cardinal Ritter Boys and Girls Cross Country Teams left on Friday night for a meet early this past Saturday in Ohio.  They were able to run in the first class 2019 Midwest Catholic Race which is the premier race of the area.  Out of 25 teams that competed, the boys took 8th overall while taking 4th in the small division while the girls took 4th overall and 2nd in smaller schools.  Out of the 10 podium finishes, the Raiders took 5 total.

The girls ran extremely hard as they had a boost from Mariah “MHR” Wehrle who came back from injury to and took 3rd falling just one position behind her sister “Marathon” Mary Anna Wehrle who posted an amazing 2nd place finish overall.  Jenna “Get Up And Go” Gruber continued her hot streak by controlling her pace as she followed the Wehrles in 4th.  Hannah “Kick” Wells was up near the lead pack for the first mile and like always finished strong as she placed 12th overall. 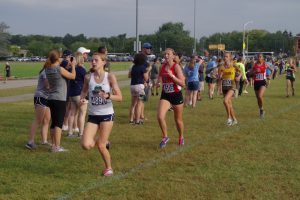 The boys did almost as well as they had 3 in the top 20 and 2 on the podium.  Paul “Streaker” Stamm placed 2nd, his twin Will “Stride” Stamm took 4th and Eli Bush took 11th overall.  The big surprise of the meet was Owen Sulecki who stepped up big time and ran a PR by 30 seconds on a course that was about 30 seconds slower than others.

Coach Ford said, “The stars of the meet on the girls side was a 5 way battle between the top 5 runners, but the nod goes to Jenna as she achieved the satisfaction of beating (one of her major opponents) soundly.  For the boys it was easy… It was Owen for his incredible run.” 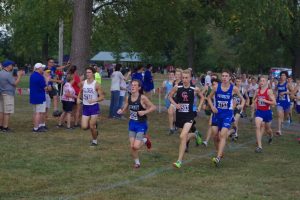 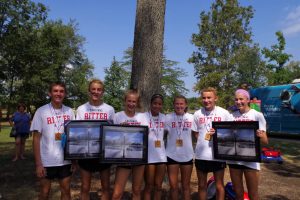 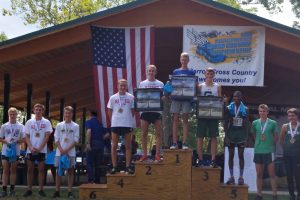 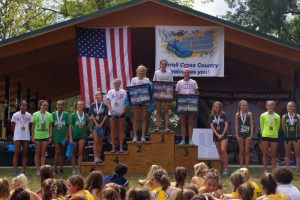 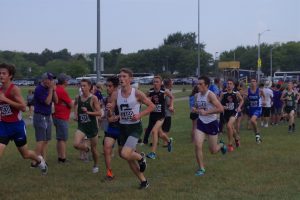