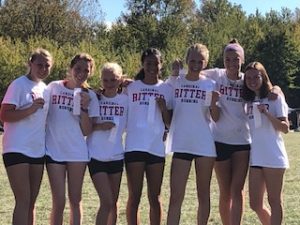 The skies were sunny and the weather was perfect for running on Saturday as the Boys and Girls Cross Country Teams competed in the IHSAA Cross Country Regional at Ben Davis High School.  The total field of runners was a massive 180 with only 10 teams and 20 individual runners moving on to Semi-State.  In the 55 year history of Cardinal Ritter High School, only 4 Raider teams had ever moved on to the Semi State.  Now add another as the Girls Team took 3rd place overall and earned a spot at the upcoming IHSAA Semi-State Cross Country Championship at Shelbyville.  In addition to the girls, Paul “Stride” and Wil “Streaker” Stamm also pushed through. 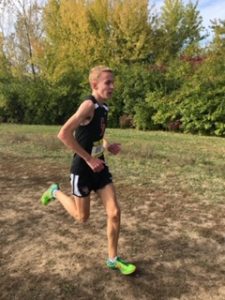 The boys team had a great showing and their spirit was symbolized by Peter Sperry who was running with Osgood Schlatter.  the pain was so bad he was forced to numb his legs before the race, but that didn’t stop him nor did it stop the team from digging down and getting the best out of their abilities.  Senior, Eli Bush went out in a strong was earning a PR and just missing a chance to move on.  Another runner that earned a PR was Aaron Anderson who destroyed his previous one by a minute.  Max Foshee ran his best race of the year by far and P. Stamm placed 4th and barely missed his PR.  All the while Wil Stamm smashed his PR and placed 8th overall.

Coach Ford said of the boys performance, “It was one of the few times since I have coached that I was not even the slightest disappointed that we barely missed moving on… How can you be when the boys left everything out on that course! They made themselves and Cardinal Ritter very proud.”  He added, “I did have a bit of tear but of pride as I realized I will never see Peter and Eli race again in cross country.  The ave their all for 4 years and I am going to miss them.” 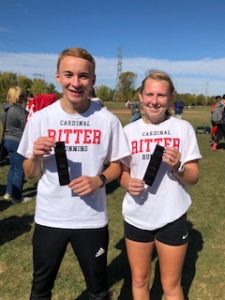 The Lady Raiders made it out of the Regional for the second time in as many years.  Mariah “MHR” Wehrle again broke the school record running a PR and placing 4th overall.  However, “Marathon” Mary Anna Wehrle also had a PR and broke the school record by running a second faster at 18:11.4.  Jenna “Get Up An Go” Gruber did not finish in the top 10 in Sectionals but came ready as she took 8th overall at the Regional, smashing her PR.  Sarah Jacob, who has been nursing a foot injury finished strong running a 22:13 and securing the teams 3rd place finish.

For the girls it was business as usual since they did it previously, but Coach Ford disagreed by saying, “They will someday realize that small schools like Cardinal Ritter are not supposed to make Semi-State let alone two years in a row.  It took (the school) 53 years to do it once and it may take another 50 to do it again!”

Caoch Ford added, “The Stars of the Meet… was one of the toughest for me to decide.  We had 6 PRs, 5 top 10 podium places, two girls breaking the previous school record… For the boys… It has to go to Peter, as the only reason he ran so fast in great pain was for the team.  The girls… It has to go to Sarah as she risked re-injuring her foot and like Peter, put the team ahead of herself and ran a great race, and the best news, left un-injured.

The above mentioned runners will be in the Semi State this Saturday at Shelbyville.  All Raiders should come out to see some great drama on the course as there are many story lines that will play out.  Which Werhle will come out on top?  Will the girls dig down and go as a team to State?  Can Jenna continue her masterful running?  Will the Stamm boys keep there torrid pace?

Only one way to find out which is coming out to the races on Saturday.  The races begin at 10:30 with tickets costing just $8 dollars a person.

Come out and support your Raiders!!!