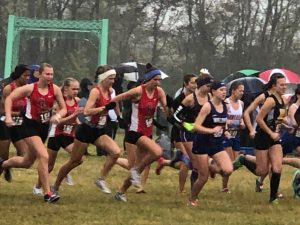 It was a cold day as Paul “Stride” Stamm, Wil “Streaker” Stamm, and the Cardinal Ritter Girls Cross Country Team traveled to one of four Semi-States on Saturday. The boys raced started at 10:30, and they faced light rain as an obstacle for their race, but being mentally tough competitors, the Stamm boys did not seem to be handicapped by a little rain. This mentality showed through as Paul Stamm ran with the leading pack and secured a very impressive 6th place finish. Wil was not too far behind, placing 18th overall.

The girls team definitely felt pressure Saturday to make history. Mariah “MHR” Wehrle’s broken clavicle and Sarah Jacob’s stress reaction set the girls team back for a while, but today they were ready to give it their all. Mariah Wehrle and “MaryAnna” Mary Anna Wehrle ran with the front pack for most of the race, but Mariah Wehrle had an incredible surge in the last half mile to secure 3rd place, the highest a Cardinal Ritter Runner has ever placed at Semi-State.  Mary Anna was not too far behind, finishing 9th. Jenna “Get Up And Go” Gruber also had a very impressive race, finishing in 24th place. Sarah Jacob and Hannah “Kick” Wells ran together for some of the race, which very well may have been the key to the girl’s success. 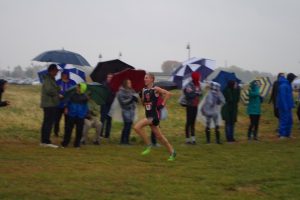 The awards ceremony was held at the Shelby County Fairgrounds to get out of the rain. It was exciting seeing Mary Anna, Mariah, Paul, and Wil get their ribbons for their individual finishes, but silence fell over the Cardinal Ritter fans as the announcer began to read of team scores for the girls. The top six teams would be moving on to next week’s State Finals. “In 8th place with 206 points …Brownsburg. In 7th place with 179…Indianapolis Cathedral.” The fans went crazy. For the first time in Cardinal Ritter history, we are sending a team to the State meet!

The State Finals will be held at LaVern Gibson Championship Cross Country Course in Terre Haute on November 2nd. The boy’s race is at 1 pm and the girl’s race is at 1:45 pm. 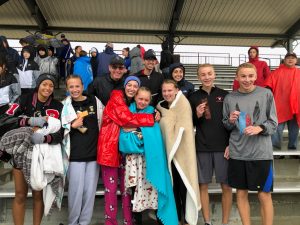 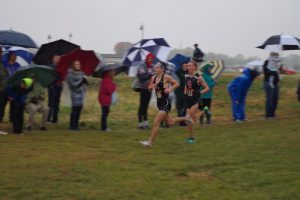 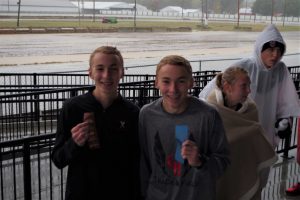