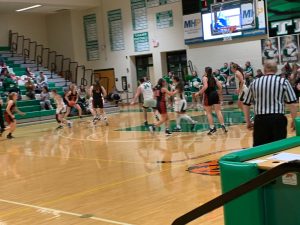 The Cardinal Ritter Girls Basketball Team was on a roll in Indiana Crossroads Conference play as they went 5-0 to start before suffering a small hiccup on Tuesday against #1 ranked Triton Central Lady Tigers.  The Lady Raiders were cruising through ICC play while playing an exciting brand of basketball, beating Speedway, Lutheran and Monrovia to begin the season before taking on Shanandoah in a tough game.  CRHS bounced back slightly as they beat Cascade at their place 58-50 then won in a landslide victory over crosstown rival, Scecina, 69-29. 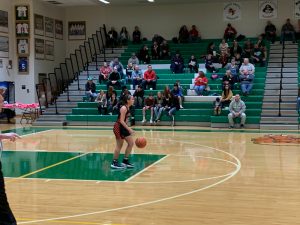 The Cascade game was interesting as the Lady Raiders came out cold to start the game.  Maybe it was the travel, but the team found trouble making buckets early finding themselves down 28-25 at the half.  Behind the hot shooting of Emma “Lights Out” Litzelman, the Raiders found their groove and outscored the Cadets 34-22 to earn the victory.  Elena “The Closer” Closser was excellent down the stretch finishing with 9 points and 5 assists.  Chloe “Ole… Ole, Ole” Olejnik also had 9 points to go along with her 6 rebounds.  Meghan “Sure Shot” Sandifer picked up 6 points in the victory while Gabby “Heat Check” Hicks and Kelsey “Wild Card” Waggoner each scored 4. 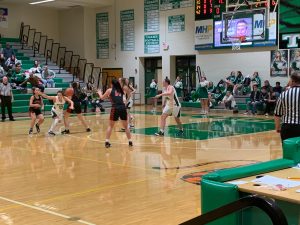 After that, Cardinal Ritter laid a beat down on Scecina as they played stifling defense and were making shots from everywhere on the court.  Olejnik led all scorers with 11 as she took the ball strong to the hole throughout the day.  Jenna “Get Up And Go” Gruber played some great minutes and showed her shooting skills adding 10 points.  Sandifer worked on her game inside and out, coming away with 10 points like Gruber.  Litzelman added 8 points, Linsey “Scoops” Waggoner and Closser both had 7, “Wild Card” had 6 and Hicks and Maddie Sandifer added 5 each.

After going undefeated in ICC play, the Lady Raiders traveled to hostile environment of Triton Central for their sixth conference match-up.  The Raiders trailed 23-7 after the first quarter and struggled to find their footing from the tip losing 82-43 against their #1 ranked foe.  The crowd may have gotten to Cardinal Ritter early as they struggled to make shots and found themselves on the bad end of seemingly every 50/50 ball during the course of the night.  As they say, sometimes the ball doesn’t bounce the way you want and for the Lady Raiders it didn’t.  There were some positives during the night as Hicks led the team in scoring with 14 and Kelsey Waggoner followed with 13.

The Lady Raiders are back in action Saturday for a west side match-up at Covenant Christian.  The JV game will tip at 2 PM with Varsity to follow.