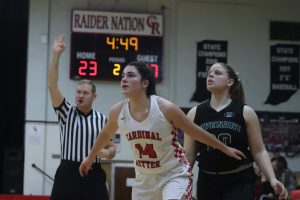 The Cardinal Ritter Girls Basketball Team was in action this week as they took on Brebeuf on Saturday before beginning the City Tournament on Monday.  On Saturday the Raiders traveled to Brebeuf to play an afternoon game.  The Lady Raiders got off to a hot start shooting the basketball and jumping to a 17-3 first quarter lead.  Defense was the story in this one, with the Lady Raiders holding Brebeuf to a game total of 18 points.  In the 36-18 victory the girls were led in scoring by Emma “Lights Out” Litzelman with 15 points, 8 rebounds and 3 steals. 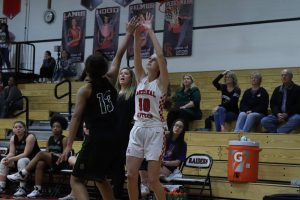 Your JV Lady Raiders continued their winning ways also as they handed the loss to the Lady Braves of Brebeuf 40-19.

The first half was hotly contested and the Lady Raiders held just a 4 point lead. They ramped up the defensive pressure in the second half, allowing just 1 point to be scored in the 4th quarter.

Maddie Sandifer led the way with 12 points and Liv “Wu-Tang” Webb added 9, knocking down 2 three pointers in the process. “Raking” Riley Heim had a standout defensive game with a handful of steals. 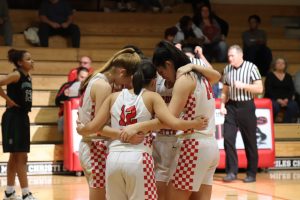 The City Tournament began Monday as the Raiders took on visiting Washington High School.  The #4 seed of the City Tournament, the Raiders full court pressure proved too much for the Continentals to handle.  Forcing many turnovers, the girls jumped to a 22-10 first quarter lead.
The offense was efficient with the girls making the extra pass, which led to several open easy buckets.  Four girls were in double figures scoring leading to a 63-32 victory.  Litzelman led the way again with 17 points and 3 steals.  Kelsey “Wild Card Waggoner finished with 13 points and Chloe “Ole… Ole, Ole,” Olejnik had 11 points.  With the win the Lady Raiders advanced to play Covenant Christian at home on Tuesday night.
In a rematch of the 47-43 Raiders victory over Covenant Christian, the game was close the entire first half.  The Lady Raiders were trailing by one after the first quarter and 6 points at halftime.  The second half proved to be the back breaker, as Covenant Christian dominated the rebounding wile having far fewer turnovers.  This time it was Covenant Christian winning the rematch 55-40.  The Lady Raiders were led in scoring and rebounding by Litzelman with 20 points and 8 rebounds.
The JV squad had 1st and 2nd round byes so they play again Thursday at Cathedral in the semi final round at 4:30.  Next up for both Lady Raiders teams together is a trip to Tri West.
Official Sponsor