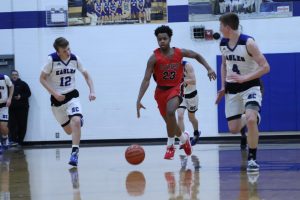 The Cardinal Ritter Raiders Boys Basketball Team defeated the Heritage Christian Eagles 67-56 on Tuesday night to open up the City tournament. The first half was a back and forth 16 minutes with several lead changes and ties throughout the first two periods.  The Raiders Defense was active forcing turnovers and dominating the glass, but the Eagles were able to connect on timely threes to keep the game close.  Junior Aidan Cannon was a big offensive spark to start the game connecting on 3 out of 5 three pointers in the first half to fuel the Raiders offense. The Eagles however were able to get into halftime on a last second 3 pointer to give them a 28-25 advantage going into halftime. 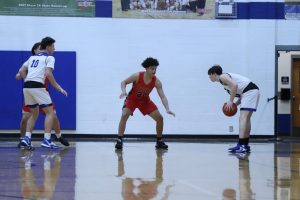 Coming out of halftime it was the Damon “Old Oak” Ogletree show.  Ogletree was unstoppable near the rim, and controlled the boards helping the Raiders create separation from the Eagles and putting the game out of reach early in the 4th quarter.  Every time the Eagles would respond with a made bucket the Raiders were able to go on a mini run of their own to cruise to a comfortable victory over the Eagles.  Ogletree finished the night with 28 points and 17 rebounds.  Joining him in double figures was Junior Aidan Cannon with 16 points.  Sophomore Jordan Turner flirted with a triple double finishing with 9 points, 10 rebounds and 8 assist.
With the win the Raiders advance to the 2nd round of the City Tournament to take on top seeded Crispus Attucks Tigers Thursday Night at 7:30 PM.
Jan
16