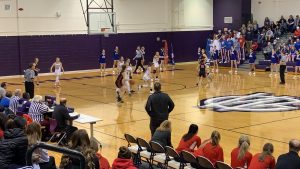 Cue the music, “We Are The Champions!”  The Lady Raiders Basketball Team are Sectional Champions.  Let that sink in.  This team did one of the hardest things to do in all of sports.  They had a team comprised of mostly seniors.  Not only seniors, but seniors that have played together since 6th grade. With all of the stress and pressure of the expectations of winning the Sectional since the beginning of the season, they went out and showed why those expectations were there. 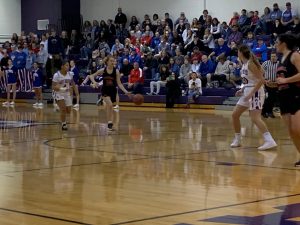 It cannot be overstated how difficult it is in today’s day and age to perform with these lofty expectations thrown at you. The recent success of winning the Sectional 2 years ago and appearing in 6 of the last 8 Sectional Championships, the social media scrutiny and with the media suddenly calling you the underdog can be overwhelming, but these Lady Raiders ignored the outside noise and were focused on one common goal.  Winning!  And they won in exciting fashion over the weekend.  They first came out and beat Indiana Crossroads Conference rivals Speedway in a back and forth game on Friday and finished it up on Saturday with a physical battle against Indian Creek in the Sectional Championship at George Washington High School.  As the saying goes, “Big time players show up in big time games,” and the Lady Raiders showed up! 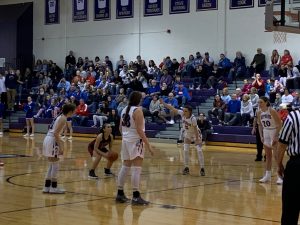 On Friday, the gym was rocking with an energetic, big, loud crowd.  Both teams fans were unrelenting throughout the hard fought game.  The Lady Raiders led after one quarter, 14-10 behind 5 points from Emma “Lights Out” Litzelman and 4 points from Meghan “Sure Shot” Sandifer.  The second quarter saw the Spark Plugs battling back behind some huge three pointers to even the score at 28 at the half.

The heavyweight fight continued into the third as each team matched the other’s shots for another even score of 42-42.   The game was close all the way until about 2 minutes left when the Raiders began to pull away and the Plugs were forced to foul.  As anyone who has seen CRHS knows, if the ball is in Elena Closser’s hands on the free throw line, the game is over.  “The Closer” iced it with a couple of free throws to give the home team the win.  The fourth quarter proved to be the winner for the Lady Raiders as they outscored Speedway 15-8 for a 57-52 victory. 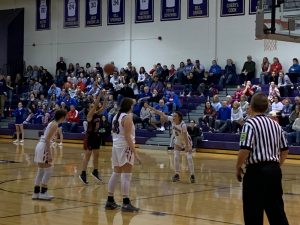 With the emotional victory, the Lady Raiders still had to come back and play an Indian Creek team that won the night before in overtime.  Indian Creek came out with an aggressive man to man defense which saw Cardinal Ritter respond with its own trademark man to man.  Chloe “Ole… Ole, Ole,” Olejnik and Kelsey “Wild Card” Waggoner got off to a quick start in the first quarter, scoring 6 and 4 points respectively which saw their team up 16-10 after the first period.  However, Indian Creek wasn’t going away as they won the second quarter but trailed at the half 28-27. 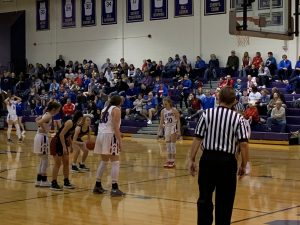 The third quarter is when both team’s star players started to heat up, but it was the fourth quarter that made all of the difference for the Lady Raiders.  They continued to play hard, aggressive man to man defense even with how physical the game was getting.  Defense paired with making free throws down the stretch brought them a 67-55 Sectional Championship victory.  It was a total team effort with 3 girls in double figures and two more with 8 a piece.

Cardinal Ritter was led in scoring by Waggoner who was definitely the “Wild Card” in the game scoring 21 points.  She was completely in the zone and looked unfazed by anything.  She had arguably the best game of her young career.  Sandifer (13 points) and Olejnik (10 Points) both finished in double figures.  Closer and Litzelman each finished the game with 8 a piece and were both instrumental handling the ball and hitting clutch free throws down the stretch to secure the win. 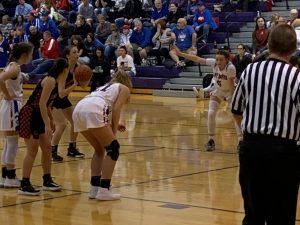 The Lady Raiders now travel to Greencastle next Saturday for a 10 AM tip-off against top 10 ranked Brownstown Central.  Show up early to reserve your seats to watch this exciting team! 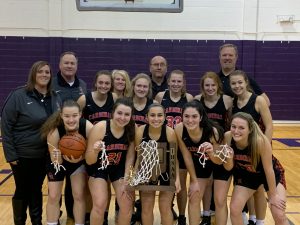 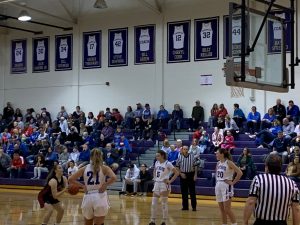