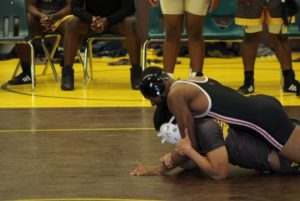 The Cardinal Ritter Wrestling Team had members of the team advance to the Regional Championship this past Saturday at Perry Meridian sending 6 wrestlers to the wrestling hot spot.  Out of those six, two wrestlers managed to finish in the top 4 and move on to the New Castle Semi-State this upcoming Saturday.

Nintendo has Super Mario Bros., but Cardinal Ritter has our own better version of the Super Smash Bros., the Johnson Brothers.  Both Josh and Jordan Johnson were able to place in the top 4 to advance.  Josh placed 4th overall, a remarkable achievement especially for a freshman. 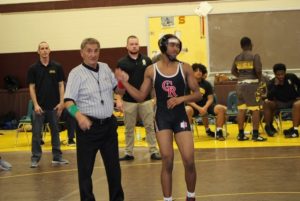 Jordan got revenge on his Sectional loss.  Jordan’s opponent who beat him at the Sectional won the previous week despite Jordan being up in points.  Jordan received a bloody nose which would not stop bleeding in the allotted blood time which forced a disqualification.  At the Regional, Jordan took over and beat his opponent to finish third overall on the day.

Come out this Saturday to support Johnson & Johnson this weekend as they compete in the Semi State.  Weigh ins begin at 9 AM.