The Raider Cross Country Team goes every year to Marion hoping to run fast against some great competition and also run against teams they rarely see.  It is a great meet and always a good time.  This year it did not disappoint as 8 of the 11 runners got PRs and competed very well and each team ran in the Elite race which is for the best teams and runners.  The only downfall was that the parents/fans could not watch. The team had four girls run Jenna “Get and Go” Gruber, Hannah “Kick” Wells, Sarah Jacob, and Kat Carlson and all 4 girls smashed their previous PR with Hannah’s PR dating back to Semi-Sate her sophomore year.   Both Gruber and Wells finished on the virtual podium receiving medals for placing 14th and 21st.
The boys Wil “Stride” Stamm, Nicholas Mark, Ethan “Lionfish” Lettich, and Ivan Miller also posted the best  PRs.  Both Wil and Paul “Streaker” Stamm did very well receiving medals. Wil placed 3rd over all and ran his best race of his young career.  Placing 3rd at this meet is the highest the team had 4 boys accomplish that which is very remarkable.  Paul placed 4th.  This is the first time he has not won this year in 5 races.  Paul was disappointed but Coach Ford was not. Coach Ford said after, “I was so proud of Paul as he went for the win and it did not matter if he placed 2nd , in which I believe he easily would have ,but he could have also placed 10th.   Not many runners have the guts to do that.  To understand how hard he ran, is he ran a near PR for his first mile,  he just did not have anything left for the last mile.  Wil Stamm ran a smart race as he kept in contact with Paul and that  allowed him to kick his way to 3rd.  Nicholas Mark almost placed 17th barely missing it by running an impressive 18:00.1.  Ethan Lettich ran close by Nicholas the whole race.  Ivan Miller ran tough as he also does.  Overall the boys placed 14th out 18 teams which is awesome considering the competition.”
Coach Ford said, “The Stars of the Meet are Ethan Lettich and Hannah Wells.  Ethan’s goal this year was to break 19 minutes and Coach Ford  revised it to 18:30 before the season started.  Well Ethan ran 18:30 so now Ethan has a new goal of breaking 18 minutes! He is such a tough competitor.  For the girls  Hannah Wells beat her PR of  two years,  and Coach Ford wants to note that at same meet last year Hannah placed  84th but  ran 63 places better this year, which is very impressive. Way to go Raiders! The Teams next meet is the  All Catholic Tournament  this coming weekend.” 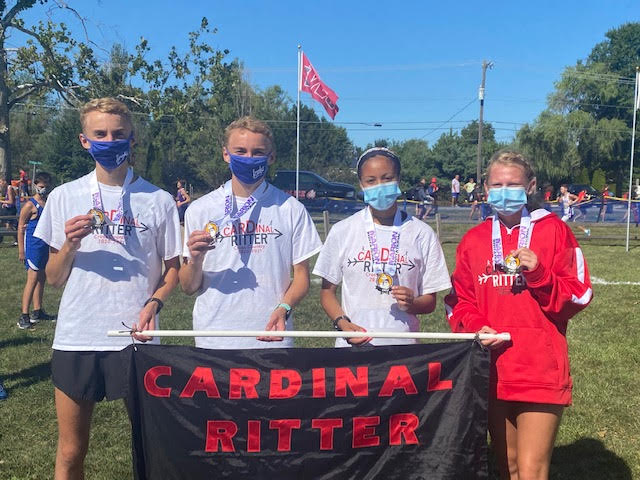