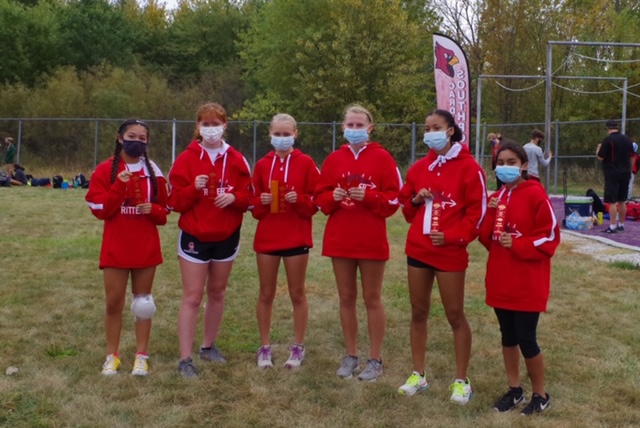 The Cardinal Ritter Boys ang Girls Cross Country Teams headed to Ben Davis for the IHSAA Sectional and had tremendous success.  As Coach Ford explained, “It has been hard for me to put in words what happened Saturday.”
With the highs there was one big low that Coach Ford is referring to.  This low also is a story about toughness, grit and determination.  Wil “Streaker” Stamm, one of the best male runners in Cardinal Ritter history, was primed and ready to make a run all the way to the State Championship, but something unexplainable happened.  He began limping in pain.  This is, as Coach Ford stated, “an elite runner who would have placed in the top 15.”  Rather than give up and stop racing, Stamm found some way to grind out the entire race with what looks to be an injury that most wouldn’t be able to walk on.  Sometimes it isn’t who finishes first, but rather who never quits.  Sometimes sports shows more than the winners and losers and this was no exception.  Stamm’s inspiration fueled the team as he finished the race in extreme pain and agony.  This powerful gesture of making it to the finish line no matter what is something that will be talked about in Raiders lore for years.  Thank you for positive influence Wil!
Even with the bad news, the day could have not stated better as the girls placed 2nd. The last 200 meters was worth the price of admission as Zionsville’s top runner and Jenna “Get Up and Go” Gruber battled it out, swapping leads up to 4 times.  In the end, Gruber came in just .04 seconds behind finishing an astounding 2nd place overall as she led the Lady Raiders.  She wasn’t the only one in the top 6 as Hannah “Kick” Wells finished 3rd and Junior Sarah Jacob placed 6th.  These three ladies earned All-Sectional honors.  Stephanie Molina nearly took a minute off her PR and placed 22nd.  Kat Carlson, ran incredible coming within 13 seconds of her PR, placing an impressive 29th.  This pushed the team to a second place overall finish.
The boys placed 7th and thus their season is over as the injuries were too much to overcome.  Coach Ford said, “It is just incredible what Paul (“Stride” Stamm) is doing.  He ran that race in 15:33 by himself!”
This is a Sectional that historically sees the winner around the 16 minute mark and Paul blew that number out of the water.
Sophomore Carson Vrabel ran an impressive 21:50 while junior Nicholas Mark was the 5th runner highest, as they take top 10, from a non qualifying school and qualified to run at Regional with Paul.
Senior Dom Oaldon earned his first varsity letter this day, competing in the Sectional for the first time in his career.
Coach Ford said of Dom, “Saturday was decarded Dom’s Day in his honor.  He is a great example for all younger runners.”
Coach Ford added, “The Stars of the Meet are very easy!  For the boys it was Wil Stamm for his courage, determination and just pure grit.  Like I mentioned two years ago for what he did to help us win City, we should rename the at Mental Attitude for XC to the Wil Stamm Award!  For the girls, it was Jenna Gruber who controlled most of the race and just barely lost in last 5 meters.”
Great job Raiders!
2020 XC Girls IHSAA Regional Ben Davis 2020 XC Boys Regional Ben Davis
Nov
28