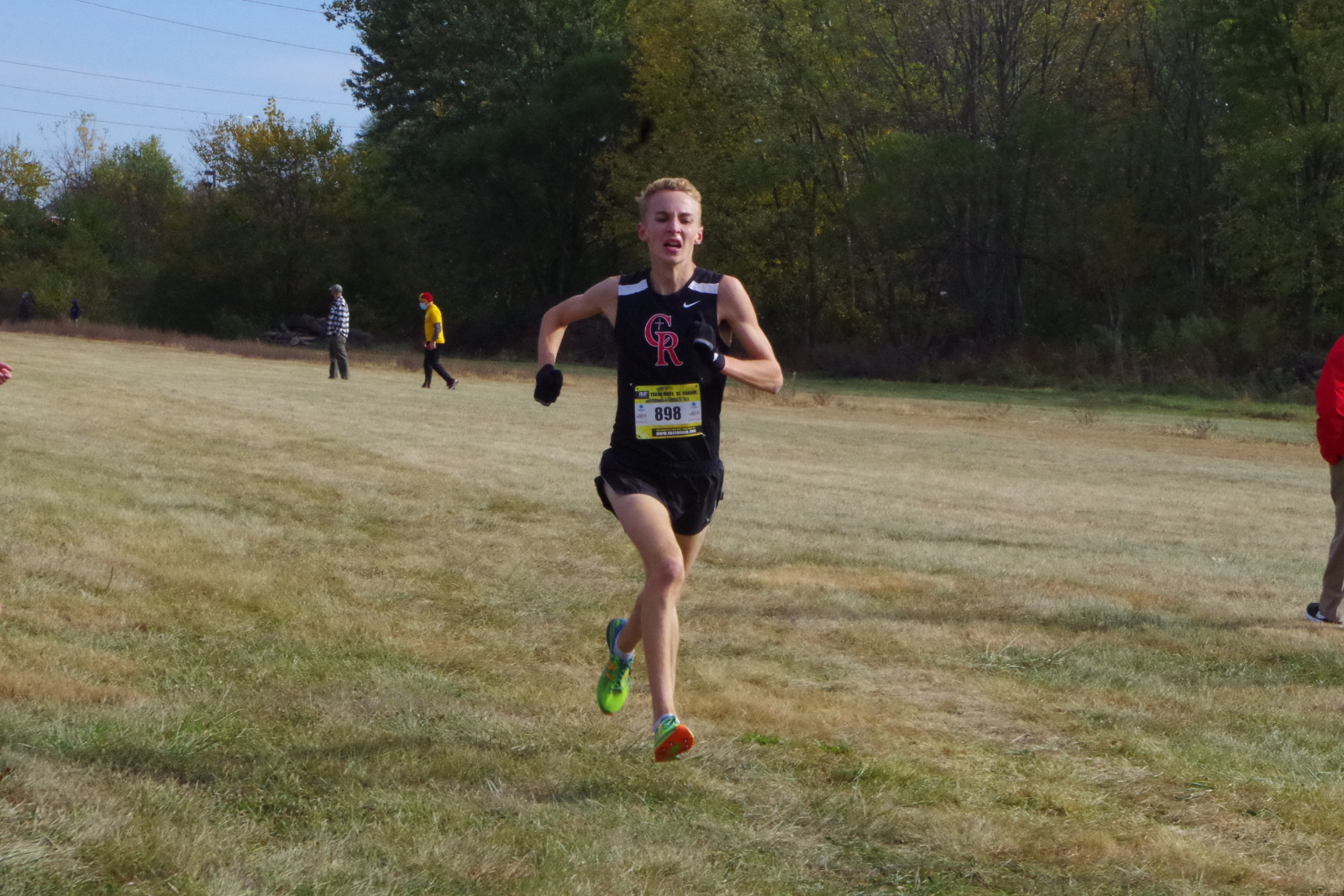 It was a cold, partly sunny Saturday morning at Ben Davis for the 2020 IHSAA Regionals.  However, that cold air did not derail the great performances put on by the Girls and Boys Cross Country Team of Cardinal Ritter.  The Girls unexpectedly placed 4th overall to move onto Semi-State behind the great running of Jenna “Get Up and Go” Gruber and Hannah “Kick” Wells.  Junior, Sarah Jacob was also in the mix coming away with a 14th place finish.
On the boys side, Senior Paul “Stride” Stamm did what he always does and won his 2nd Regional title.  All in all, the both Raiders teams combined to have 4 All Regional runners which are given to the top 15 runners.  In addition, of the 8 runners that ran, 4 had PRs, two came within seconds of theirs, a season best time, and a mile PR!
With the departure of the Werhle twins from last year, many in the running world counted the Lady Raiders out.  But that only added fuel to their fire as they placed 4th and beat many big 5A & 6A schools.  They were lead by the new 1-2 punch of Gruber and Wells which did even better than the Wehrle girls last year, placing 2nd and 3rd, with Jenna barely missing her PR and Hannah breaking hers. Then came Sarah Jacob who was seeded 24th and made them pay as she ran in the top 20 all day and finally unleashed her amazing kick.
Coach Ford commented about Jacob,  “I just asked her the other day where it (her kick) was and she smiled,  as only Sarah can, so I think she knew it had not gone anywhere and (she) put it on display by blowing by several runners the last 200 meters to finish 14th in a PR time of 19:54.” 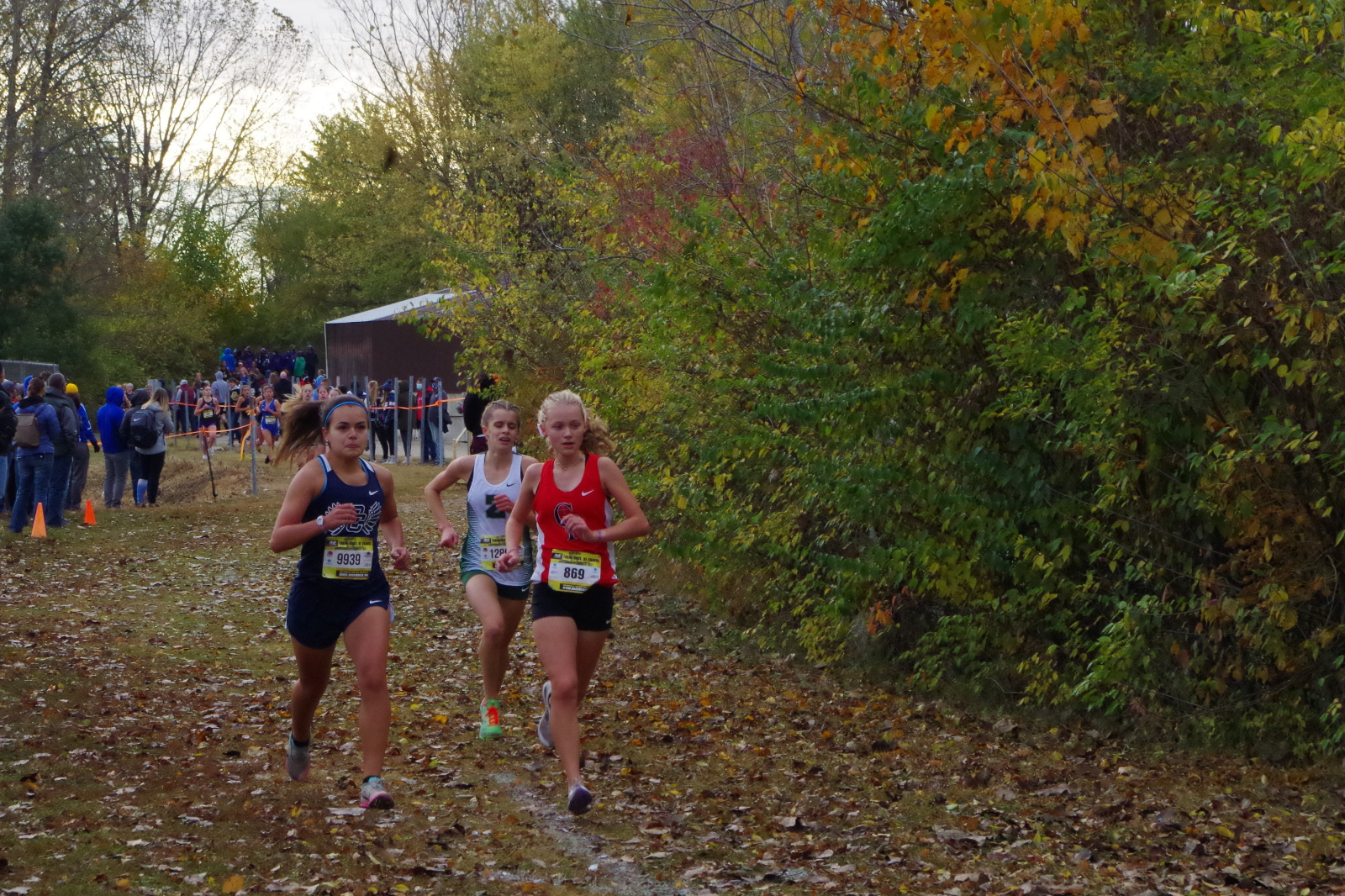 “PR” Stephanie Molina who has come out of no where and has run a PR in every race this year had an untied shoe mid race which made her stop for 20-30 seconds and she STILL had a PR.  Then came Kat Carlson as she blew her PR away by over a minute in 22:19 is a gutsy determined performance.  Lastly the Lady Raiders had Sophie “Queen” Konger running a season best time and performing very well.  Coach Ford glowed with pride, “I felt beyond proud to be their coach and I am sure Coach Danielle and Tommy felt the same way. I have not stopped smiling.”
Paul did what no runner has ever done at Cardinal Ritter which has been his theme the whole year, and that was to win Regional twice.  He has created a bit of a rivalry with Zionsville’s runner who stole the Regional out from under Paul last year after Paul won his sophomore year.  Well, the Eagle runner tried, as Paul waited for it and countered with his own move and went even faster, breaking his competitors spirit and coming away with the win and a PR.  Nicholas failed to move on but that wasn’t because he did not try he ran a PR for his first mile which was a major accomplishment.
Coach Ford added, “This week since there was not a full boys team, I decided to pick one Star of Meet for the whole team.  It was tough with so many PRs, a Regional Champ, a girl that ran a PR despite almost shoeless, but it goes to Sarah Jacob.  Very few, except some coaches and former runners, can appreciate what Sarah did Saturday as she pushed herself way harder than she has had in a long time and did it seemingly with ease which it was not and that is a trait of an elite runner, which she is not yet but maybe one day will be.  Great job Sarah and great job to all the Cardinal Ritter runners Saturday as they again made us proud and what I like to say, “It was a great day to be a Raider”!”
Onto Semi-State! Go Raiders!!!
Nov
25