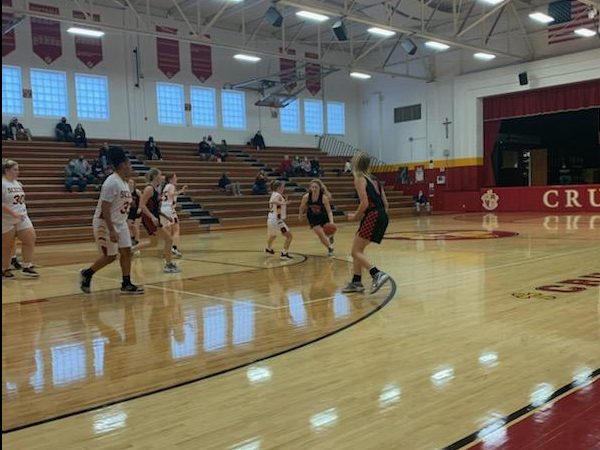 The Cardinal Ritter Girls Basketball Team travelled to Scecina Memorial High School last Saturday to take on the Lady Crusaders in their third Indiana Crossroads Conference game of the year.  The Lady Raiders struggled to fill the net early and went into the second quarter down 12-7.  After that is was all Cardinal Ritter as they ended up winning 51-29.

Emma “Lights Out” Litzelman led the team with 17 points on 4 of 6 from 3 point land and adding 5 rebounds and 3 steals.  Kelsey “Wild Card” Waggoner followed Litzelman’s lead and added 10 points and 8 boards and 3 steals of her own.  Megan McCall “Me Maybe” was her typical steady self adding 6 points.  “Raking” Riley Heim has used her athleticism and meshed it with her growing basketball skills to also add 6 points while playing great defense with 3 steals and attacking the glass while pulling down 8 rebounds.  Jenna “Get Up and Go” Gruber and Lauren “Steamin'” Beaman both added 5 points while adding 4 and 2 rebounds, respectively.  Olivia “Wu-Tang” Webb helped distribute the ball with a couple of assists while also playing good defense and Freshman, Evelyn Buck scored the first varsity bucket of her career.