It was cloudy cool Saturday morning at Guerin Catholic High School for the State All-Catholic meet and the Cardinal Ritter team had two firsts.  One, Paul “Streaker” Stamm became the first CR runner to win and two, both teams finished on the podium at same meet.  Neither was ever done before, until Saturday.  Placing on

The Raiders Tennis Team hosted the City for Shortridge Monday night at Riverside falling 2-3.  Senior Aron Gebremskel carded his first win at 2 singles winning easily 6-1 6-1. Coach Rubey was ecstatic syaing,  “Congratulations Aron!” Simeon Pontones stepped up to 3 singles and made a 2nd set run against a steady opponent. With his jump

On Thursday, the Cardinal Ritter Soccer Program hosted Lutheran High School in an Indiana Crossroads Conference JV/Varsity double header.  The teams are starting to find their footing that has proven to make deep runs into the state tournament and Thursday was no exception as each team beat the Saints to take the sweep. The JV

It was a foggy, damp cool day on Friday when the Lady Raider golfers took to the links in the City Golf Championship at South Grove Golf Course, but the cooler weather made for better scores for the Raiders as they fired their best team score of the season with a 393.  That was enough

The Raiders traveled to Speedway Thursday. The boys fought hard and played really well at all positions. Seniors Mark Baker and Aron Gebremskel played singles for the Raiders, and while Aron came up short he improved his on court decision making and patience! Baker withstood a tough comeback by senior Sam Earle on his senior 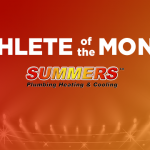 The Raiders traveled to Broad Ripple Park to take on City foe Bishop Chatard, falling 0-5. While we fought well at all positions, we have some work to do to improve. Senior Mark Baker delivered the closest match but fell short in a tight 5-7 3-6 contest today. Tomorrow we travel to rival Speedway  for

The Lady Raiders golfers split a three-way match on Wednesday with Covenant Christian and Park Tudor at Coffin Golf Club. The Raiders fired a 218 to beat Covenant, who  shot 231, but fell to Park Tudor who shot a 199. Lydia Schembre had a rough round, but still led the Raider scoring effort with a

With the first month of school and athletics for the 2020 school year in the books, we have our first Booster Club Athletes of the Month for the month of August.  There were many qualified individuals with many of our student-athletes having a blistering start to their season.  In the end, two were selected in