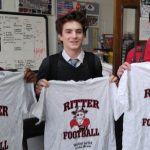 The off season can determine a lot of things. Teams can find ways to get stronger and they build relationships that definitely help when they are counting on each other.  The work accomplished in the weight room helps everyone believe in each other and get stronger as they finish each rep! The following young men 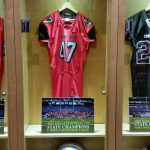 The 2016 IHSAA Football State Champions helmets, jerseys, and team photos are now on display here at Lucas Oil Stadium.  Cardinal Ritter is very well represented.  If you are in Lucas Oil for an event, head to the southwest corner of street level to see the display. Go Raiders!​ ​ 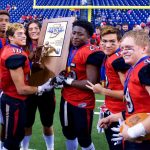 As a team the Cardinal Ritter Football program dealt with adversity and continued to improve week in and week out. Several players from the 2016 2A State Championship team were recognized by the Indiana Football Coaches Association (IFCA) for the continued performance at the highest level. Each player should take with them the sharpened belief 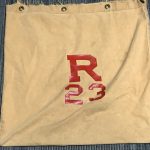 This season proved to be a magical one for our Cardinal Ritter family.  Many are unaware that this season also marked the 50th anniversary of the Varsity program’s existence.  In the beginning of October the Raiders faithful seemed a little down, after a 1-4 start there were many naysayers and typical for a team having 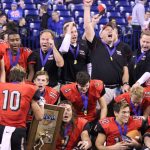 By Jack Adams Photos By M. Egenolf The lines were drawn. The stage was set. The Cardinal Ritter Raiders stepped onto the gridiron one last time at Lucas Oil Stadium at high noon to battle the Eastbrook Panthers for the State Championship. The game took place Friday, November 25. After leading a shutout against the 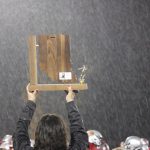 By Jack Adams The cold and the rain were unrelenting, but the game must go on. The Cardinal Ritter Raiders football team took to the field for a rematch against the Monrovia Bulldogs on Friday, November 18, at 8 pm at Marian University. A win would advance one team to the place they met in week 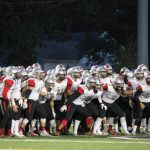 The Cardinal Ritter football team competes tonight for the IHSAA Semi-State Championship at 7 PM at Marian University.  They are playing conference rival Monrovia with gates open at 6 and tickets for $10 a piece. This is a rematch from the week 1 game where Monrovia beat the Raiders late in the game at Lucas Oil Stadium. 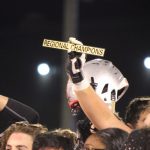 By Jack Adams The drive was long and the night was frigid, but it was worth it as the Cardinal Ritter Raiders squared off against the Milan Indians on Friday, November 11, at 7 pm at Milan High School. The Raiders almost had a shutout against Milan, as they did two weeks ago against Scecina 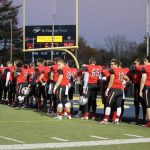 By Jack Adams There was a chill in the air as the Cardinal Ritter Raiders walked onto the turf against the Lapel Bulldogs. Both teams fought an ongoing struggle to gain the advantage, but ultimately the Raiders had the better hand and beat Lapel by a slim margin of 26-21, emerging victorious in the 2016

By Jack Adams The Cardinal Ritter Raiders football team, from the start of their game at 7 pm to its finish, dominated every second of the game on Friday night.  The Raiders played the Scecina Memorial Crusaders at UIndy on October 28 and not only did the Raiders lead in scoring the whole game, they