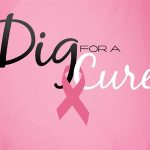 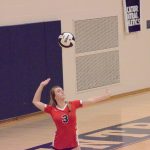 By Linsey Waggoner On Tuesday, September 4th The Lady Raiders Volleyball Program traveled to Roncalli for freshman, JV and varsity games. All three teams would end up losing, but not without putting up a fierce fight. The Roncalli Rebels are always a tough team to beat and this year they were particularly good, ranked 22nd in the 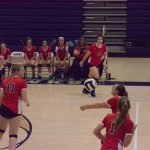 The Cardinal Ritter Girls Varsity Volleyball Team defeated Decatur Central in four sets Wednesday night. The Raiders started off slow losing set one 18-25. However the Raiders bounced back, taking the next three sets 25-13, 25-13, 25-16. Offensively the Lady Raiders were led by Junior, Olivia Dininger with 11 kills while Grace Armbruster added 9 kills. The 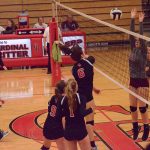 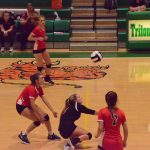 The Cardinal Ritter Varsity Girls Volleyball Team lost to Triton Central Monday night in 4 sets. The Tigers took the first and second sets 14-25 and 20-25.  The Raiders battled back and took set three 25-20, but ultimately fell short losing the fourth set 19-25. The Raider offense was ran by MariClaire Warnock with 19 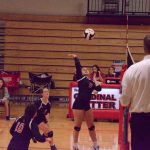 The Cardinal Ritter Varsity Volleyball Team defeated Beech Grove in three straight sets on Thursday night. The Raiders defeated the Hornets 25-15, 25-23, 25-21. This is the second conference win for the Raiders. Offensively, the Raiders were led by senior outside hitter, Grace Armbruster and freshmen outside hitter, Kelsey Waggoner with 8 and 6 kills 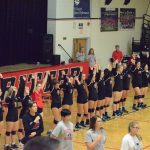 The Raiders Girls Varsity Volleyball Team lost in three sets to Brebeuf last night 10-25, 11-25, and 7-25. The Raiders fought hard throughout the match, but it wasn’t enough to take down the Braves. Freshmen Kelsey Waggoner lead the offense for the Raiders. While Senior MariClaire Warnock lead the Raiders in both digs and assists.   The 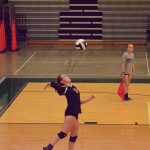 The Cardinal Ritter Varsity Girls Volleyball Team defeated Monrovia High School in four sets last night. All four sets were very competitive with scores of 25-21, 25-23, 25-27, and 25-23.   This was the first conference game of the season for the Raiders. Offensively the Raiders were lead by Grace Armbruster with 16 kills. Defensively the team was 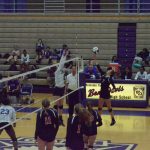 The Girls Varsity Volleyball Team defeated Ben Davis Thursday night in 4 sets. The Lady Raiders started off strong in set 1, winning 25-16, but the Lady Giants rallied back and took set 2, 26-28. In the end the Raiders prevailed winning 25-9 and 27-25. The Lady Raider offense was lead by senior, Grace Armbruster who 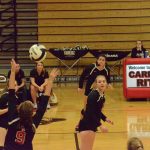 The Cardinal Ritter Varsity Girls Volleyball Team lost in three sets Tuesday night to Chatard. The Raiders started the match off slow, but really battled with the Trojans at the end.  Chloe Olejnik led the Raider offense with a kill percentage of 28.6% while Amy “A Pee-Zee” Price led the defense with 16 digs. Megan Van Gheem lead